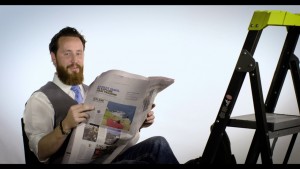 TEMPE, Ariz. – There are a dozen or so late night shows on the air right now, and they all have the exact same opinion. Apologia Studios is about to disrupt the echo chamber with their political late-night comedy, “Next Week with Jeff Durbin.”

Jeff Durbin is the pastor of Apologia Church and Apologia Studios, which has a huge social media following, including top YouTube and podcast channels, with millions of views.

Now Jeff Durbin is joining the long, long (did I mention it’s long?) list of late-night hosts. “Next Week with Jeff Durbin” is taking on both sides of the political spectrum with the Christian worldview, making it the late-night show with the unpopular opinion. Yep, that’s the slogan. It’s catchy-and also probably super true. Combining monologues, and sketches, this show will take apart every political news headline and moral failure that occurs in this country weekly. And trust us, it occurs weekly.

The witty host is a formal martial arts champion who appeared in Teenage Mutant Ninja Turtles, and was Johnny Cage in the Mortal Combat stage production (in case you’re into that sorta thing). He will now be delivering his killer kicks to political comedy punchlines.

Head writer Chris Wineland (comedian, former writer for Late Night with Jimmy Fallon) leads up the punchy jokes and gags for the show. Not to toot his own horn, but he’s great at anything he writes, whether it’s jokes or, oh I don’t know, press releases.

“Next Week with Jeff Durbin” will air every Tuesday at 10 PM Eastern on Facebook Live, Tuesday, August 1st.