Pastor Robert Jeffress And The Prophets Of Ahab 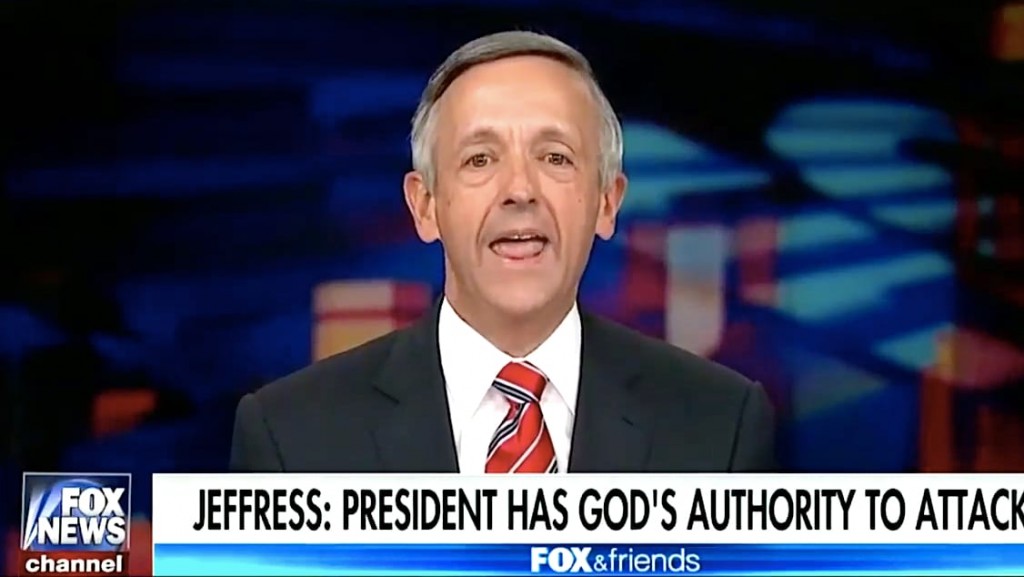 Most people reading this column probably know that I have been in the Gospel ministry for over 40 years. I am a lifelong student of the scriptures; I began learning the Bible from my father before I started kindergarten. Before I could read, my dad saw to it that I had the books of the entire Bible memorized. I have degrees or diplomas from three Bible colleges and institutes and attended a fourth. During these forty-plus years of ministry, I have pastored two churches. The first, a Baptist church, I pastored for 35 years; the second, a non-denominational fellowship, I have pastored for almost seven years. So, I am not a novice regarding the study and exegesis of God’s Holy Word.

Frankly, over the past several years, I have become extremely disappointed with what passes for “preaching” in most churches today. Regardless of denomination, I find a serious dearth of both scholarship and courage in too many of America’s pulpits. It seems to me that a majority of pastors are much more success-driven than they are truth-driven. The emphasis in most pulpits seems to be on attendance, financial income, and increasing programs, staff, and buildings. Furthermore, the content commonly emanating from these pulpits mostly regurgitates denominational dogma, seminary indoctrination, mega-church mimicry, and political partisanship. Genuine independent self-study and the sheer guts to preach controversial truth are almost nonexistent in most of America’s pulpits today. And the spiritual condition of our churches (and country) reflects it.

And as I have discussed many times in this column and in my messages, Romans 13 is one of the most egregiously misinterpreted passages of Scripture in America. Romans 13 is distorted to the point that Christians in this country have become little more than carbon copies of what a majority of Christians became in Nazi Germany: sheepish slaves of the state.

Yes, Romans 13 was Hitler’s favorite Bible passage. He had many of Germany’s pastors and preachers (“spiritual advisers”) constantly delivering sermons and Bible studies that taught (indoctrinated) churches to believe that, as Germany’s leader, Hitler had God’s approbation to do “anything,” including attacking foreign countries (which, of course, he did), and that it was the Christian’s duty to submit–and that any lack of submission to Hitler was a lack of submission to God. If this sounds eerily familiar to what you are hearing in the church you currently attend, you are in a Hitlerian church, my friend, and you need to GET OUT.

If you doubt that history is repeating itself, just listen to what one of President Donald Trump’s spiritual 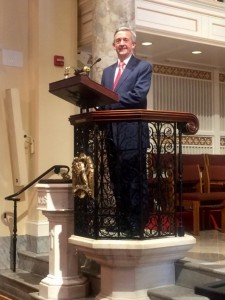 advisers said a few days ago. Pastor Robert Jeffress of First Baptist Church in Dallas, Texas, brazenly told the world that God had given Trump authority to “take out” North Korean leader Kim Jong Un by any means necessary, including war.

In a subsequent interview, Pastor Jeffress said, “The Bible gives President Trump the moral authority to use whatever force necessary, including assassination or even war, to take out an evildoer like Kim Jong Un.”

I find it more than interesting that the Articles of Faith of First Baptist Dallas, Section XVI. Peace and War, says, “It is the duty of Christians to seek peace with all men on principles of righteousness. In accordance with the spirit and teachings of Christ, they should do all in their power to put an end to war.”

By Pastor Jeffress’ own statement of faith, Christians have a duty to seek peace with North Korea’s Kim Jong Un and “should do all in their power to put an end to war.” How, then, can Pastor Jeffress encourage Donald Trump to start a war when his own statement of faith says that Christians have a duty to put an end to war? This is what happens when preachers start pandering to power: they lose sight of their core principles.

Like the pastors in Nazi Germany, Jeffress was referring to Romans 13 in his interview.

The fact is, Romans 13 is not addressing the subject of war and military assassination AT ALL. For Pastor Jeffress, a man that has degrees from two Christian universities and two Christian seminaries, to take such a sophomoric and downright erroneous interpretation of this passage of Scripture can only mean that 1) he never truly learned how to exegete Scripture, or 2) he KNOWS the passage doesn’t teach what he postulated, and he is deliberately pandering to political power–i.e., the President of the United States. 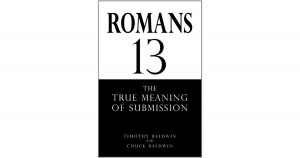 Romans 13 – Written by Pastor Baldwin and his son

Romans 13 is specifically and directly discussing the responsibility that a believer in Christ has toward his or her own civil government and the responsibility a civil government has with its citizens. To say that Romans 13 gives carte blanche for a governmental leader to do anything he or she wants in regard to assassination and war is an egregious misinterpretation of this passage. Dr. Jeffress should be embarrassed to even suggest such an uneducated interpretation. Then again, he might simply be regurgitating what he was taught in the universities and seminaries he attended. After all, this misinterpretation of Romans 13 is ubiquitous among evangelical colleges, seminaries, and universities these days.

Dr. Jeffress apparently doesn’t understand the Biblical and Natural Law principles regarding just and unjust war. Christian scholars, philosophers, and ministers throughout Western Civilization–from Augustine and Thomas Aquinas to Samuel Pufendorf, Emer de Vattel, Algernon Sidney, Hugo Grotius, and John Locke to Matthew Henry, Adam Clarke, Albert Barnes, John Gill, and Charles Spurgeon to America’s Founding Fathers and colonial pastors–have understood and taught that there are just and unjust reasons to enter war and there are just and unjust ways to wage war. No governmental leader has authority from God (or from anyone else) to do whatever he or she wants relative to assassinations and war. To suggest otherwise is lunacy.

As I read and watched Dr. Jeffress’ comments, I could not help but think about the story of King Ahab and Israel’s prophets in I Kings 22. Israel’s King Ahab (mind you, this is Old Testament Israel: God’s chosen nation) desired to attack Syria. I’m sure if Dr. Jeffress were ministering during the reign of Ahab, he would be telling Israel’s king the same thing he is telling Donald Trump today: “God has given you authority to use any force you want, be it assassination or war. Syria’s King Benhadad is an ‘evil’ man, and, therefore, God has authorized you to take him out.” And that is essentially what all of the pathetic, pandering preachers in Israel told King Ahab. (I can hear Dr. Jeffress retorting, “Ahab was a wicked king; I would never side with a wicked ruler.” But I remind Dr. Jeffress that Donald Trump lived a very wicked life for virtually all of his life. And to engage in a premature and, therefore, unjust war is a VERY wicked sin–one which Dr. Jeffress is personally participating in by giving Mr. Trump this counsel. Trump’s wicked lifestyle and his entertaining an unconstitutional, unjust war hasn’t changed Dr. Jeffress’ pandering to President Trump in the same way that King Ahab’s wickedness didn’t stop the prophets of Israel from pandering to him.)

You can read the rest of the story in I Kings 22. There was one prophet, just one, who boldly told King Ahab that he was about to fight an unjust war and that, if he proceeded, God would kill him. Ahab didn’t listen to Micaiah, and Israel’s army was slaughtered by the Syrians, and King Ahab was killed, just as the prophet had said. It didn’t matter that Israel was God’s chosen nation and that Syria’s King Benhadad was an “evil” ruler. Ahab fought an unjust war, and he paid the price.

Our President is not a king; he is not an emperor; he is not a monarch. Only the people’s representatives in Congress can lawfully declare war. Any war fought outside the jurisdictional authority of the U.S. Constitution is an illegal war. Tragically, America has not fought a constitutional war since World War II. And our spineless congressmen (from both parties) have allowed presidents–left and right–to get away with it.

Now Mr. Trump is even threatening to take military action against the country of Venezuela. Ladies and gentlemen, Venezuela does not pose the slightest threat to the United States, and everyone knows it. Venezuela is not worth one single drop of blood from one single American.

And don’t try and tell me that Trump is motivated by compassion for the Venezuelan people. No people on earth are suffering any more than the people of Yemen and The Sudan. For two years, a vile and vicious dictator, the King of Saudi Arabia, has been waging a relentless genocidal war against Yemen. Not only is Mr. Trump doing nothing to assist the poor beleaguered souls of Yemen, he has made billions of dollars worth of military weapons and equipment available to the Saudi dictator. Beyond that, the U.S. and British navies are actually helping Saudi Arabia blockade the coast of Yemen, thereby keeping much-needed humanitarian aid from entering the country. So, don’t tell me that Donald Trump is considering military action in Venezuela because of humanitarian reasons. The real reason couldn’t be because Venezuela has some of the largest reserves of oil and natural gas in the world, could it? No, of course not. 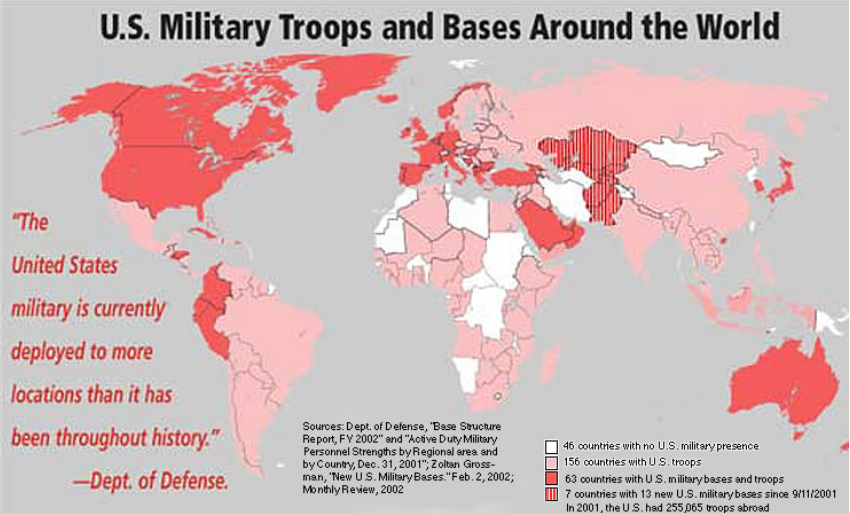 Here is the truth: the United States is no longer an independent republic as bequeathed to us by our Founding Fathers; it is a global empire. We have nearly 1,000 military installations located in 135 countries, which is 70% of the world’s nations. We have missiles located in South Korea that are aimed at North Korea–missiles that South Korea doesn’t want, by the way. South Korea knows that Trump’s bellicose behavior is not protecting them; it is endangering them. Look how we reacted when we discovered missiles in Cuba. We are conducting military exercises on North Korea’s border, on Russia’s border, and on the border of China’s waterways. Our forces completely surround Iran. Pray tell, how would WE act if a hostile nation were showing that kind of force and aggression on OUR borders? We would consider it an act of war. Yet, the military forces of the United States engage in this kind of provocative activity EVERY DAY–and have been engaging in this kind of activity for decades. And this does not even take into account the political assassinations, kidnappings, arms shipments (America is the largest arms dealer in the world), and clandestine acts of aggression carried out daily by the CIA. If one is looking for an aggressor state, look no further than Washington, D.C.

Throughout history, rulers of global empires have believed that they possessed divine authority to wage war on whomever they wanted and whenever they wanted. And every last one of them led their countries to total destruction. America will NOT be the exception. Global empires are destined to collapse under the weight of their own empire. It is inevitable.

For preachers such as Dr. Robert Jeffress to carelessly tell our President that he has some kind of divine authority to wage war against anyone he wants and in any manner he wants is unscriptural, unconstitutional, and unconscionable.