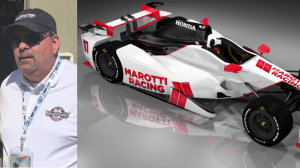 The Rev. Will Marotti, who was dubbed “No Pastor Faster” in 2016, returns to the Indy 500 in 2017 with a Special Car and a Special Message and Invites Fellow Christians to Be an Integral Part of Bringing Prayer and Unity to the INDY 500 National Audience

WALLINFORD, Conn. – Last May, Rev. Will Marotti became the first active pastor in history to lead a team to the Indianapolis 500. The Schmidt-Peterson / Marotti Racing car #77 qualified tenth for the 100th running of the Indy 500 and then ran as high as fourth place with ten laps to go, eventually finishing twelfth. Now he is posed to do it again in the 2017 running of the Indy 500 – but with a special car and a special message.

Considered the most famous and well-known race, the Indy 500, which takes place on Memorial Day Weekend each year, see’s over 400,000 in attendance with upwards of 8-10 million who watch live on television, while 2-3 million usually listen live on the radio.

And it’s this audience that the pastor wants to tap into with his special car and message that is tailored toward the nation. Recognizing the great division in America following the most recent presidential election, Marotti is looking to make history again, while making an effort to help bring unity to the U.S. Marotti is planning to enter a unique, never before themed car into the 101st running of the Indy 500. The pastor will enter the God Bless America Special into the race this coming 2017 Memorial Day Weekend. The car is designed in a red, white and blue livery with the words God Bless America emboldened across both sides of the Dallara IndyCar chassis.

“I want to rally people of faith to see this race as a time to bring the healing power of prayer to the Nation – to all those who are involved in and watch the Indy 500,” states Marotti, Senior Pastor of New Life Church in Wallingford, Connecticut. “Besides the actual car running in the race, we are also planning on holding prayer events at the track through the month of May and on race day.”

Indy Track historian Donald Davidson verified that Marotti was the first “active minister” leading a team to race at the “Brickyard” last year.

Marotti states, “The Lord opened up tremendous doors at the Indy 500 last year, fulfilling a boyhood dream of mine but also making history as the first pastor EVER to lead a race team at the Indy 500. This year, I want our entry to bring even greater glory to God by not only uniting the church in prayer for our country, but also by witnessing the truth of the Gospel to the vast audience that watches the Indy 500.”

Marotti is seeking traditional sponsorship to help with funding the monumental effort in addition to launching a national crowd funding campaign with the funding platform IndieGoGo.

Fans and supporters will have ten levels to invest and receive rewards ranging from commemorative shirts, to a private dinner with the team and driver, to showcasing their favorite charity or business and actually waving the green flag for the qualifying attempt of the car.

Rev. Marotti is available for interviews from Indiana, either by affiliate studio, at the track, skype, or phone.