(WNS)–Voters in the nation’s fourth largest city overwhelmingly rejected a pro-LGBT rights ordinance Nov. 3, putting the skids on a well-funded campaign that drew support from the White House and Hollywood. But the momentum driving Proposition 1 met an immovable force in a group of local pastors standing on their convictions while representing Houston’s racial and cultural diversity.

“I think we can thank the Lord for what appears to be a victory not just for Houston—this is a victory for our nation,” Dave Welch, executive director of the Houston Area Pastors Council (HAPC), told a crowd of supporters gathered to watch election returns.

Once county officials released the early voting totals, the count varied only by 1 percentage point after all votes were tallied. Prop 1 went down decisively, 61 percent to 39 percent. 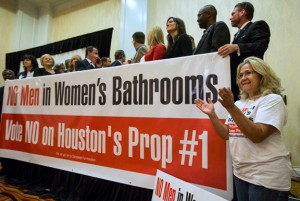 The victory was no small feat for the coalition of evangelical pastors and conservative business leaders and elected officials who—outspent 10 to 1—faced a national campaign to advance LGBT rights in Houston. But not even $3.4 million in contributions and logistical support from the Human Rights Campaign could save what critics called a fatally flawed ordinance that gave special rights to a select few while criminalizing those who would refuse to abide by it under certain circumstances. Grateful for the overwhelming voter response, Prop 1 opponents acknowledged they likely will have to work to prevent a resurrection.

“We understand when you don’t change the nature of who’s sitting in those council seats, making these decisions, you will fight these battles again,” Welch told me.

To that end, HAPC threw its support behind one of its own, Pastor Willie Davis, in his run for a Houston City Council at-large position. He will face a run-off election in December. Davis said if the Equal Rights Ordinance comes before council again, he will vote against it. The mayoral election, also on last night’s ballot, ended in a draw and HAPC leaders say they will decide soon who to support in the December run-off.

The pastors’ stand on sexual morality and the nature of what it means to be a man or woman earned them a venomous excoriation from outgoing Mayor Annise Parker, the first openly gay mayor of a major U.S. city. Although conservative civic leaders and elected officials joined the fight against the measure, Parker targeted the pastors in her concession address to Prop 1 supporters.

Parker told the crowd her rights should never be put to a popular vote. And the rights of transgender individuals, a “little-understood minority,” should not fall to the same indignity.

“This is a campaign of fear-mongering and deliberate lies. Deliberate lies,” Parker said. “They just kept spewing an ugly wad of lies from our TV screens and from pulpits.” 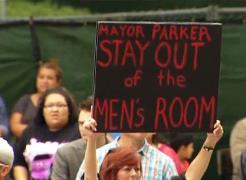 Parker was referencing the “No Men in Women’s Bathrooms” campaign by Prop 1 opponents, which warned the ordinance could be used by sexual predators to gain access to women’s bathrooms. The ads also noted the ordinance would require biological males, who identify as women, to be allowed access to bathroom, locker room, or shower facilities of their choice, regardless of the concerns of the women inside.

But opponents said the meaning of the words “male” and “female”—whether gender is determined by feelings or biology—played into the mayor’s accusations of lying. Robert Sloan, president of Houston Baptist University, agreed.

“The city is basing this [ordinance] on a definition of personhood we cannot accept,” he said. “It’s oppression. It’s political power shaping minds and ideas.”

Sloan said Parker’s introduction of the ordinance created a rift in the city.

“This is about a small group of people who want to preserve their ability to discriminate,” she told her supporters. “And they are willing to hurt all of those groups that would have been protected by that ordinance in order to do that.”

Parker never mentioned the other people whose rights might be violated by enforcing the ordinance.

“She made her choice that sexual autonomy trumps religious liberty,” said Erik Stanley, senior counsel at Alliance Defending Freedom. “That is at the heart of these laws.”

And in an email to supporters, HRC president Chad Griffin said the group must “double down” on its efforts to secure similar laws across the nation before “anti-LGBT activists” like the ones in Texas put a stop to them.

But Welch told HAPC supporters the effort was never about politics or hate.

“It’s indescribable to see the hand of God work and to see His grace fall on a city because His people rose up and showed the love of God by standing for His truth and His righteousness for His sake,” he said. “And that’s what this was all about.”