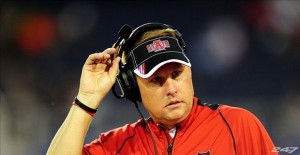 Hugh Freeze has said “God is good, even in difficult times” and revealed his “family, friends and church” are supporting him after he resigned as Mississippi’s football coach last week.

“God is good, even in difficult times,” Freeze told USA TODAY Sports. “Wonderful wife and family, and that’s my priority.” He also told the outlet he planned to meet with his pastor: “The girls have volleyball and then I’ll watch them,” he said. “I know I’m going to meet with my pastor tonight too.”
Freeze and his family are members of the Pinelake Church, the multisite Baptist church with a location in Oxford. Freeze resigned Friday after his phone records revealed a number associated with a female escort service. Ole Miss officials released a statement revealing they had found a “pattern of personal misconduct” by the famed coach.

According to the Washington Post, the school’s investigation resulted from a records request made in relation to a lawsuit filed by former Ole Miss coach Houston Nutt, who claimed Freeze and the school had smeared him in an effort to ward off NCAA investigators.

The 47-year-old – who was making more than $5 million per year – will receive no buyout, according to Ole Miss athletic director Ross Bjork.
Freeze, who went 39-25 in six seasons at Mississippi, frequently discusses his faith in public and uses his Twitter account to promote Christianity, making the revelation that he’d contacted an escort service particularly disturbing to some. Nevertheless, a number of pastors have rallied around the disgraced coach.

“Never would’ve expected this from Hugh. He just made a mistake and that’s just what sin does,” former North Oxford Baptist associate pastor Johnny Flynt said, adding that he still believes in Freeze, who is a “good person” deep down.

Michael Catt, a well-known pastor and author in Georgia who has developed a friendship with Freeze, told USA Today: “I hurt for him, but he will always be my friend. True friends are the people who walk into the room when so-called ‘friends’ walk out. All of us stumble, that’s why we need Jesus to pick us up and friends to love us when we do stumble and fall.”

Clarence Cooper, pastor of Brandon Baptist Church, said he received a text message from Freeze asking for prayers for him and his family.

“I truly believe that [Freeze] is a good man,” said Cooper, a friend of Freeze’s for two decades, according to the Baptist Press. “And he has been overtaken with a fault. In his text to me was, ‘I love you. Please pray for me. Please stand by me and pray for my family.'”

“You just don’t give up on people and I’m not giving up on Hugh …. It’s not any fun for any of us. But feeling sorry for him is not what I’m going to do. It’s been a bad week. That doesn’t mean it has to be a bad life.”