VISTA, CA (ANS) — The documentary film, Patterns of Evidence: Exodus by Timothy P. Mahoney is spectacular from the standpoint of cinematography and also as compelling biblical evidence for the Old Testament’s account of the Exodus.

Seeking answers about whether the Exodus of the Israelites out of Egypt really happened or not, filmmaker Tim Mahoney set out on a 12-year mission to document an in-depth archeological investigation. 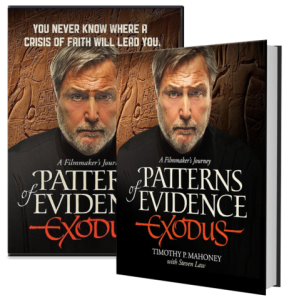 Mahoney’s quest takes him to the very locations that surround the Exodus story. As he delves more deeply into the mystery of this biblical event, a question arises: What if archeologists and other specialists have been seeking evidence in the wrong time period? That changes everything.

The film employs stunning footage on archeological findings and fascinating commentary from several archaeologists, historians, biblical scholars and even skeptics—all of which provide puzzle pieces to help create a fascinating picture—a picture which fails to adequately defy biblical narrative.

Although both sides of the Exodus argument are presented – the viewpoint of skeptics as well as believers – many people would agree that it would be hard to deny that Mahoney’s discoveries offer compelling evidence that the Exodus did in fact take place as the Bible records. But whatever way your convictions lean about the Exodus, until you see this film, your vision is limited. It’s well worth seeing.

Patterns of Evidence: Exodus by Timothy P. Mahoney also exists as a 392 page hard cover book with more than 170 color photos and 90 graphical images including the Wall of Time, charts, maps, and architectural re-creations. Both the book and the DVD make wonderful gifts and additions to any library.