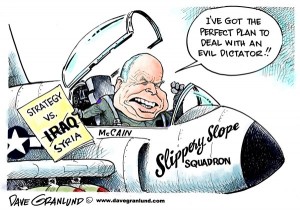 Rand Paul blasted John McCain and Lindsey Graham in a CNN op-ed recently regarding those senators’ recent push to get the U.S. more involved militarily in Syria’s civil war.

“Recently, Senators John McCain and Lindsey Graham predictably but mistakenly called for greater United States military involvement in the Syrian civil war, proving they have learned nothing from our history in the Middle East,” Paul wrote.

Sen. Paul detailed the many concerns and predictions that McCain, Graham and other neoconservative Republicans had about regime change in Iraq in 2003 and Libya in 2011, noting that these hawks were mistaken about virtually everything. The overthrow of Saddam Hussein that was supposed to help foster democracy only emboldened Iran and made way for ISIS. When Libyan dictator Muammar Gaddafi was deposed with U.S. assistance it was a gift to the Islamic State.

McCain and Graham were chief among the voices who were demonstrably wrong about Iraq and Libya. In a joint statement last week, Sens. McCain and Graham said, “As part of a broader strategy, we urge the President to take greater military action to achieve our objectives, including grounding the Syrian air force and establishing safe havens inside Syria to protect Syrians.”

Sen. Paul also noted the troubling complexities of Syria’s civil war. “McCain and Graham still argue we must depose Assad because Iran is on his side,” Paul added. “Well, ISIS is on the other side. Which is worse? I don’t know for sure, but I know neither are our friends, and neither should be treated as such.”

Paul expressed sympathy for the victims of the recent chemical attacks reported to be carried out by Syrian President Bashar al-Assad that killed dozens including children. But the senator also noted that Maplecroft’s Human Rights Risk Atlas lists 35 countries that are thought to have committed similar atrocities and other human rights abuses.

“Are we prepared to send our military to right the wrongs of all 35 countries?” Paul asks.

“United States military action is not to be taken lightly,” Paul says. “For over two decades, we have acted as a traffic cop in the Middle East — sanctions, bombings, no-fly zones, invasions, occupations, policing, nation-building.”

Sen. Paul condemned the U.S. airstrikes on Syria on April 5 and reminded President Trump of his campaign promise not to repeat the U.S.’s mistakes in Iraq and Libya. On Tuesday, the senator again appealed to the president to keep his campaign promises.

“President Trump ran on an America First platform, advocating for less intervention in global affairs, and I support him on that,” Paul wrote. “I hope he keeps to it, and I urge my colleagues in Congress to do their job and hold him to it.”