Peace For My City…I love a parade 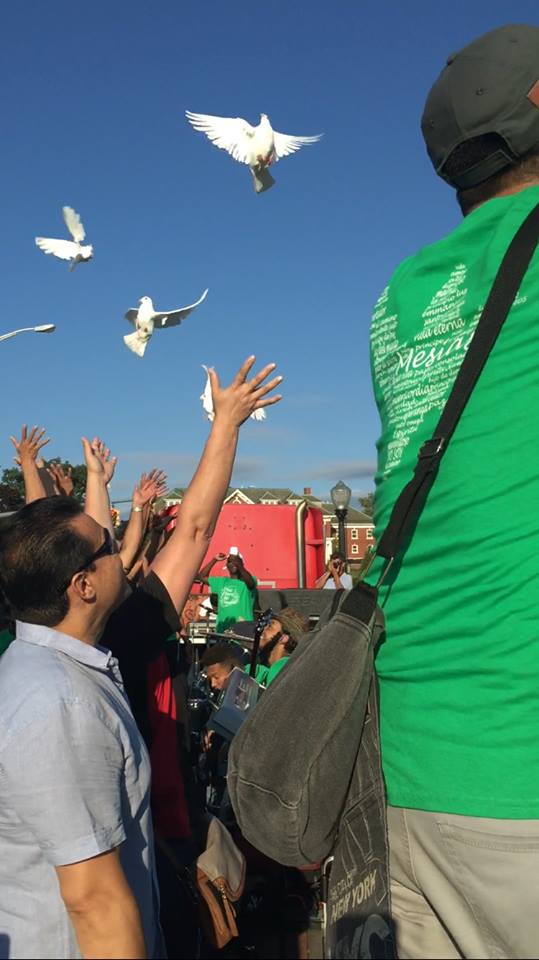 There’s a lot of talk coming from politicians and pundits alike, and it seems always to be about those things which divide us. Every day we hear a lot of debate over solutions but see very little in the way of action. Racism, hate, bigotry, and equality are all words used in such a way in the modern era, as to make me wonder if Dr. King would’ve been utterly dismayed at how badly we’ve managed to dismantle all that he worked so hard to achieve. It seems to me that human kind has become totally fixated with scientific solutions to problems of the heart and faith. Many have built islands of ideology rooted solely in their individual belief systems, which they then demand others accept as normal or the best way forward. And they’ve “generation-alized” these “solutions” leaving an entire generation without a hint of God and/or what He represents in our lives.

This type of rationalization and search for validation is the foundation for all things evil and begets the violence and division that is rotting our inner cities and overall culture. In the end, this country was indeed a melting pot of many cultures with one common thread, the simple and God-given freedom bestowed upon all of us at our birth. Regrettably, this mindset has been replaced with a slew of progressive and Godless themes, which nefarious types have slowly but steadfastly promoted over time under the cover of their twisted and revisionist version of America’s Constitution. Thus the foundational Christian tenets which where a significant part of our cultural beginnings and longevity, are now being replaced with divisiveness and ignorance. 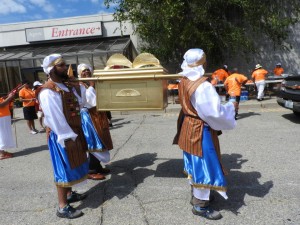 And so the debates continue, whether its guns, borders, gender, or anything else one can think of today that offends someone or some belief. But there is a comma sense light shining at the end of this seemingly endless tunnel. And as usual, it’s coming via a group of Christian stalwarts who refuse to be part of the problem. With their hearts touched by the Holy Spirit, and the words of Jesus Christ as their compass, these missionaries continue to move against the tide with peace in their hearts and salvation in their message. For they understand, that the answer to the questions of what is broken in America (and frankly around the world today) will never be found in the halls of Congress or in the workings of government of any kind, but rather it will be found in the hearts of those who know of the Gospel and all the wisdom contained therein. They understand that before debate there must be foundation. Before legislation and law there must be the commonality of righteous purpose. And before solutions, there must be family, community and faith. To that end, there are those like Pastor Felix Nava and his son Felix Jr.

Some 14 years ago, Pastor Nava’s heart rang with the call to action so many I’ve spoken with for “The GNT” have experienced. That unshakable presence that envelops and instructs in a way that broadens the heart and directs one’s deeds. Pastor Nava of the Bethel International Ministry on 17 James St. in Pawtucket, RI, was inspired to touch his community with a “march for peace in the city”, an interaction that would bring (ALL) in the community together, while at the same time preaching the transformative Word on the streets of the city for all to hear. But not just any march would suffice. Heck, what better way to get the attention of his fellow citizens and Christian brothers and sisters than with a parade… 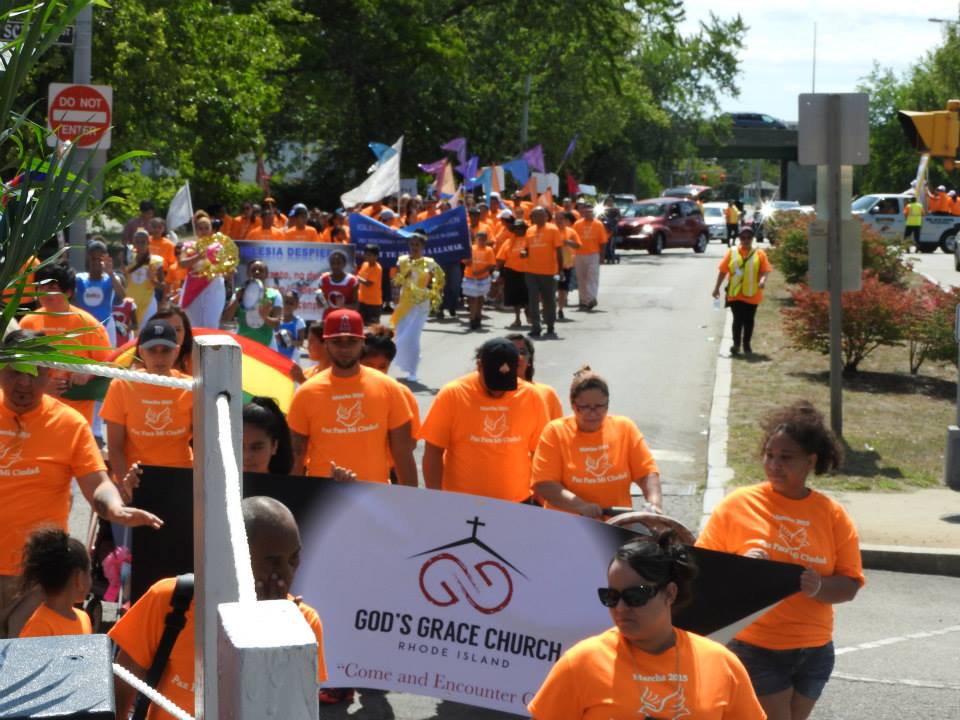 As is always the case though, God rarely gives us that which is easy for His glory. His message is meant to “steer” the listener, and this is often not easy. So, with a couple of years of planning and a whole lotta faith, the first (March – “Peace For My City”) took place in the summer of 2006. A shoe-string budget, a handful of participants and a pick-up truck with a giant Bible they had built in the back, marked a “parade” in downtown Pawtucket and neighboring Central Falls that foreshadowed a powerful message of cultural and spiritual unity to come, a message that now includes this year’s 12th “annual” event on August 25th at 4:00 PM, with multiple amazing parade floats including Noah’s Ark, worship teams, dancers, and 100’s of pastors, participants and volunteers from up and down the East Coast.

When I spoke with Pastor Nava’s son Felix Jr. recently about his father’s dream and his own role in the parades history to date, he was quick to remind me that while his father was moved by the Holy Spirit 14 years ago, the parade now belongs to the church and all who brought it to life. He explained that his father dreams of a day when these parades will be events held nationwide and will culminate on the grounds of their respective state capitals with the message of peace and prayer which is now the soul of March 2018 “Peace For My City”. This is already happening BTW, in places like Salem, MA, (if you can believe that), and with great enthusiasm, as well as in neighboring Connecticut.

As is normally the case, Felix and I had a conversation that was not only informative, as we seek to promote the matters of Christ’s Church, but it was heartwarming and uplifting, giving me hope for the future. Felix spoke of salvation as the central purpose of the parade but with the added mix of faith and community necessary to facilitate a foundation for the message of The Gospel which is ultimately the beginnings of peace in our cities and in our homes. We spoke of the many volunteers who now make up the parade staff and how of the 80 letters sent to churches 14 years ago announcing the parade, when only one in Central Falls responded. So it’s truly amazing how God then moves through our faith and in His wisdom and promise, and provides…

Felix brimmed with the excitement of a worthy participant/organizer as he described the additions over the years, like the amazing floats, worship teams and dancers which provide the music and 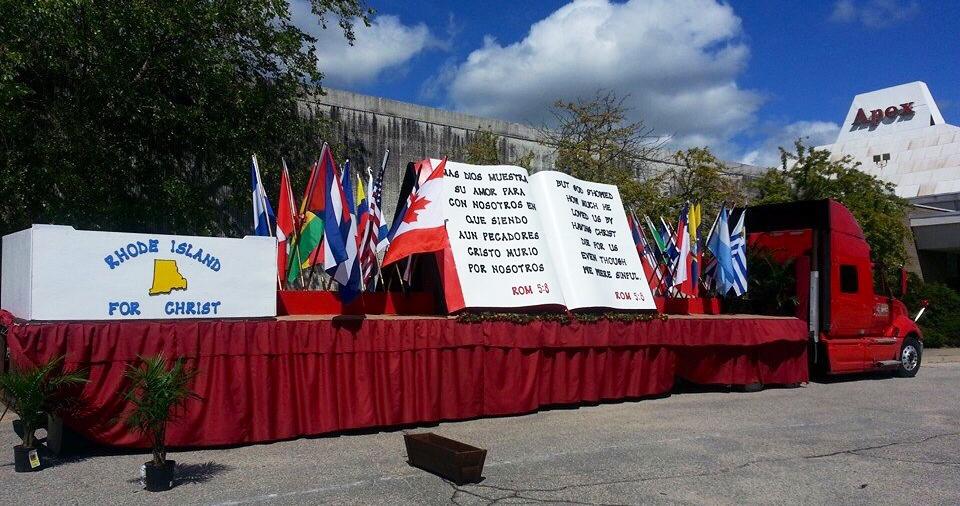 excitement, and he explained the distribution of Bible Tracts along the route, and how training became necessary over the years as the parade grew and grew and the safety of those in the roadway became paramount. Success and growth do come with safety concerns, though Felix told me they welcome all who wish to participate so long as they adhere to the safety guidelines and follow their team leaders. 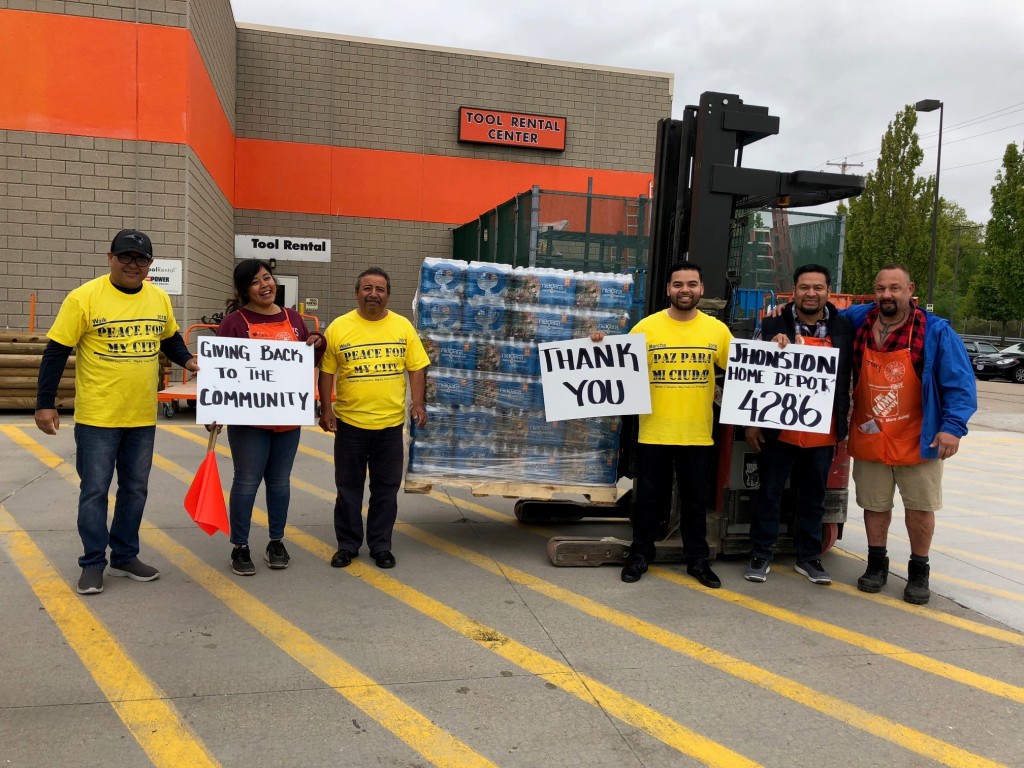 Felix and I talked of the monumental task it’s now become to put on the parade as it continues to grow, and how for the first time this past year, the ever-increasing budget of $12,000 – $14,000 was operationally in blue. He praised the many donations the parade receives such as 2000 water bottles from Home Depot as well as other contributors, and how these gifts are so appreciated, (especially by those walking in the hot sun of a New England summer day). Even the use of a school bus for children and the elderly who may tire on the route and are not able to continue on foot is so welcomed.

They have even received financial assistance from the city of Central Falls for the often expensive police escort details needed for the safety of the marchers, and he told me of how they’re hopeful and prayerful Pawtucket may do the same in the future. And I was not surprised to hear of some of my brothers and sisters in blue volunteering their own time in like manner for the parade, as well as letters and emails of support from surrounding police chiefs and city council members having been received. For those who stand on the line between good and evil in our communities every day, there are fewer and fewer answers but Christ to be sure.

Felix mentioned something to me that struck a chord too. As many of you may know, I was raised a Catholic, and I’ve struggle with what “I” perceive as a lack of unity among those of the Christian 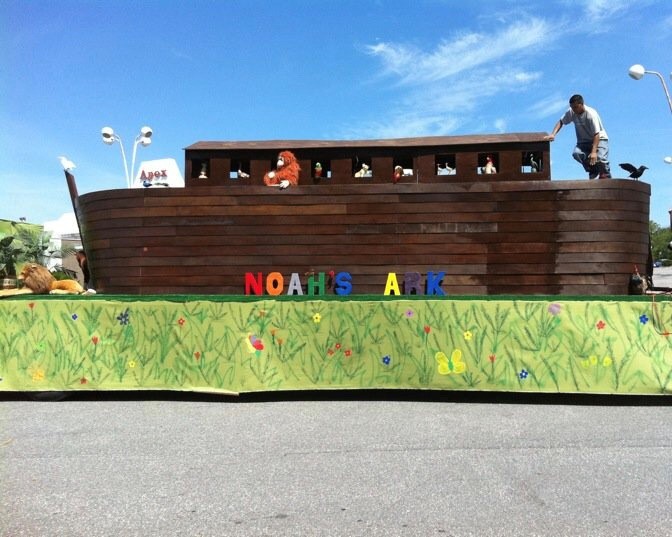 persuasion if you will. But Felix assured me that while the parade will always have The Gospel and salvation at it’s core, it is most certainly also a means to bring folks together and serve as a unifying mechanism for the church as a whole and for the community collective. This is what I believe must be at the heart of ANY solutions oriented approach to the ill’s we face. And while it may sound a bit cliché, I do believe that “United we stand, divided we fall”…

Nevertheless, events such as this parade are an (amazing and joyful approach to an amazing and joyful message). “Peace For (Our) City” and all cities is paramount to the success of our state and of our country. And to achieve that peace, we must return to the message of Jesus Christ and the peace that comes with it.

As we wrapped up, Felix also shared with me how he’d been to school for Criminal Justice and wanted to be a police officer back in 2012. He caught me a bit off guard as he explained that God intervened and showed him a different path he needed to follow and how fulfilling it has been for him. I’m always a bit off my game and hesitant when I hear young folks talk of the career path I took and the pitfalls that come with it, as it’s something very, very different today. I only hope he heard me and wasn’t offended when I offered my opinion on his direction. As I struggled with answers way back when, he on the other hand has had them provided for him ahead of time and may now use his God-given talents for good right now, here in his lifetime, and with tangible results he can see and feel. God bless him for that, because he’s already part of the solution, weather he realizes it or not. And that thought brought me right back to the flyer for the parade event and the message on it: Romans 14:19 “Let us therefore make every effort to do what leads to peace and to mutual edification”.

To re-iterate my Christian friends, this event is sure to be a crowd pleaser for all who attend and participate. So, make an effort to be there as the parade kicks off at the old Apex/Registry building 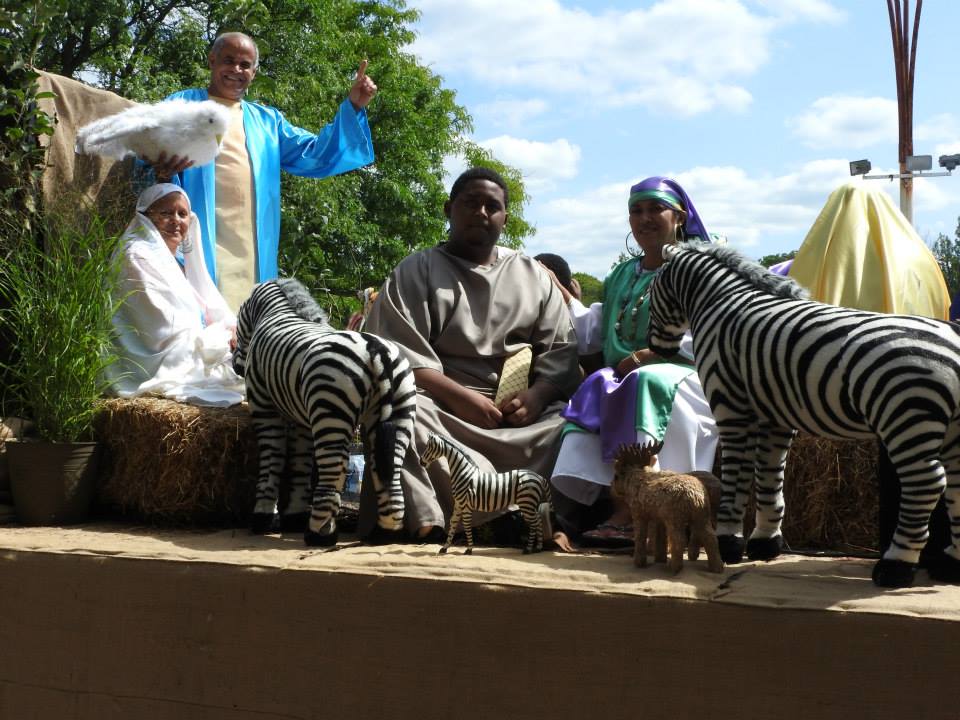 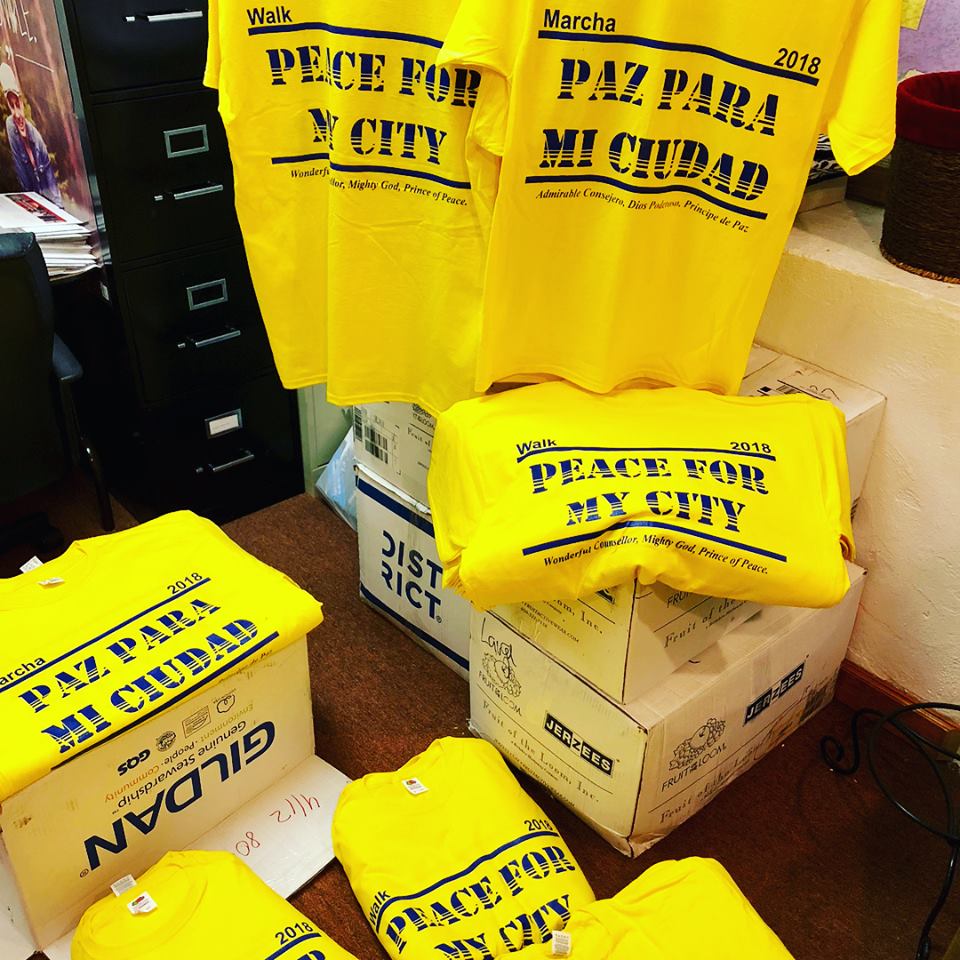 And as I mentioned, the cost of these events is something to be in awe of. Modern fees and filings make these efforts extraordinarily difficult and expensive for the doers of God’s work. But as Felix pointed out, faith has a way of resolving those issues. And you can help as well. If you’re so inclined to support this awesome function with your talents, goods, and/or in a monetary way, please check out the “March 2018 Peace For My City” Facebook page and follow the instructions on donation.

Oh, and they do ask that anyone who’d like to participate be at the Apex building by 3pm to get organized. A special united prayer service to kick off the event preparation month and simply pray as a group ahead of the parade with Pastor John Amaral, will be held August 3rd at 7:00PM at New Destiny Church, 1494 Fall River Ave

Everyone loves a parade…! Especially one for Jesus…! I’ll see you all there…