Psychiatrist Lucy advises Charlie Brown that winners impress people.  (Maybe she’s channeling her inner Donald Trump?)  The perpetual underdog and his dog embark on an epic quest, seeking the courage to dream big:  “I’m going to change who I am and become a winner.”

Will Snoopy shoot down the Red Baron?  Will Charlie Brown introduce himself to the Little Red-Haired girl?  Will Lucy pull the football?  You’ll have to see for yourself.  But it’s fun.  Lots of fun. 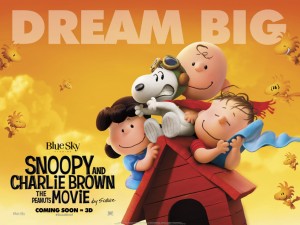 Pundits galore have analyzed these famous characters and their creator, Charles M. Schulz.  An introverted Minnesotan, Schulz drew from life experiences.  He himself was the inspiration for Charlie Brown – a shy self-doubter.  An unrequited-love-interest became the Little Red-Haired girl.  His first wife became Lucy.  The first strip appeared in 1950.

Why is Peanuts so popular?  Its simple, lovable characters portray dilemmas, emotions and dreams most of us have experienced…or want to…or hope we never will.  Who hasn’t felt uncertain or insecure about love, friendship, or personal shortcomings?

We all know bossy know-it-alls (Lucy), loyal companions (Snoopy), “A-Dork-Able” nerds (Marcie), and soft-spoken sages (Linus).  We see ourselves, our friends, our adversaries in these characters – foibles, flaws, faith and virtue – and we smile with emotional connection.

The Philadelphia Inquirer wrote, “Mr. Schulz understood not only how deadly serious childhood seems to a child, but also how childlike most grown-ups feel inside.”

Do you know a Pigpen?

Pigpen – or rather his evil twin – visited our neighborhood recently.  A young boy sat beside a park sidewalk, playing in – and covered with – dirt.  As pedestrians passed, he threw dirt on their feet.  Aware of his scheme, I stopped abruptly just before reaching him.

His dirt fell harmlessly onto the sidewalk.  My gentle suggestion that throwing dirt on passersby was not very kind, also fell…on deaf ears.

Moral character and spiritual themes have been common in Peanuts.  By one reckoning, religion figured in ten percent of the 18,000 strips.  Rev. Robert Short’s 1965 book, The Gospel According to Peanuts – over ten million copies sold – interpreted Peanuts strips as contemporary Christian parables.  The allusions are plentiful.

“The rain falls on the just and the unjust,” Charlie Brown tells Linus in a pouring storm, quoting the biblical Gospel of Matthew.  Linus reminds Lucy that in Genesis, God promised Noah a global flood would never again happen, calming her anxieties.

Linus reminds Charlie Brown – and the world – what an angel told some shepherds:  “For unto you is born this day in the city of David a Savior, which is Christ the Lord. And this shall be a sign unto you: Ye shall find the babe wrapped in swaddling clothes, lying in a manger.”

CBS execs worried about including the statements from the Gospel of Luke in the 1965 television production, but Schulz insisted and the words remained.

Schulz had his spiritual ups and downs.  But this heritage lives on in his art.  The Peanuts Movie includes a nod to the spiritual flavor of his legacy, plus excellent life lessons on character (compassion, honesty, self-sacrifice, and more).  Delightful family entertainment.