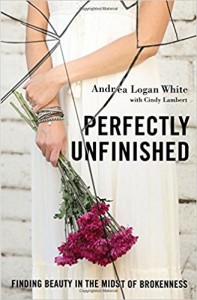 GRAND RAPIDS, MICHIGAN (ANS) – From the outside Andrea Logan White seemed to be living a perfect life as a model and actress, but underneath the happy façade she was carrying labels that attached themselves to her … unworthy… weak… insignificant.

Andrea’s deep yearning for perfection and acceptance had manifested itself throughout her life, until she found herself desperately crying out to God at a stoplight in Hollywood.

According to a news release about her book, Perfectly Unfinished: Finding Beauty In The Midst Of Brokenness (Zondervan, Sept 2017), Andrea courageously shares some of the darkest times in her life, and how God used her imperfections as a “perfectly imperfect” example of His grace and redemption.

Andrea, who is best recognized from her starring roles in feature films that include Mom’s Night Out with Patricia Heaton, and Do You Believe? with Sean Astin, now understands that God can use anyone, especially the broken and wounded, for His purpose.

When Andrea was 13 years old her parents divorced. After her father moved out of state, Andrea’s mom spent most of her time working and dating, leaving Andrea to care for herself and her two brothers. Andrea soon became distracted with the lure of drugs and an eating disorder to escape her emptiness (at one point weighing 78 pounds). After graduating high school, Andrea moved to Los Angeles to fulfill her dreams of becoming an actress and a model, but her life continued to spiral out of control.

In Perfectly Unfinished, Andrea details her experiences of dating the rich and famous, attending wild parties at the Playboy Mansion (Hugh Hefner once provided a limo ride for her to church), accepting compromising jobs to pay her bills and hiding her eating disorder while working as a personal trainer. But it was one afternoon at a Hollywood stoplight that Andrea realized she couldn’t continue living for herself and turned her life over to God.

After becoming a Christian in 2000, Andrea found freedom from many of the struggles that kept her captive. In 2003, she married actor and Pure Flix founding partner David A.R. White whom she met at church. Andrea’s new perspective of God’s unyielding grace guided her through new challenges that included a miscarriage, an eating disorder relapse, financial and marital tensions and debilitating health challenges.

Now a wife, mother of three, producer and actress, Andrea confesses she is still a work in progress but admits it is better to work with God (through faith and prayer), rather than against Him (with doubt and anger), in the unfinished places of her life.

“Still unfinished, I now understand there a fine line between moving toward Jesus, versus moving toward our own good deeds or perfectionism,” says Andrea. “I choose to surrender and find joy in the process of God’s perfect work in me because He is shining through my flaws and weaknesses so that I know it’s not I who lives, but Christ who lives in me as I am perfectly unfinished (I Cor. 1:8).”

Blending biblical counsel and spiritual encouragement, Perfectly Unfinished reminds readers of the life-changing message that God loves us just as we are and just where we are. That despite our mistakes and imperfections, Jesus is at work completing us so that we may fully share in His holiness and understand that in His eyes, we are perfectly unfinished.

Learn more about Andrea at www.andrealoganwhite.com