As a street tough and drug addict, he spent his life on the edge of the law. But heaven broke through in a surprising way one afternoon when he looked death in the face.

“I would beat up bullies,” Philbert MacKowiak said. “When I was a little kid, my mom told me the story of Samson. I would pray to God to give me strength against my three older brothers when they would pick on me, and I would beat them up.”

But if he knew about Samson, his understanding of God was limited. He fell into drugs and alcohol at age 8. By the age of 23, living in Oakland, California, he was a serious addict. One day he smoked 10 PCP joints in his car. When a police officer rapped on his window and ordered him to open it, he suddenly hit the gas pedal, flying off with “50 cop cars after me,” he recounted.

He started driving towards the Bay Bridge with patrol cars in tow. “I was going to drive my car off the Bay Bridge,” he said. “I was furious. I hated the world. I didn’t want to live, but I was scared to kill myself because I heard it was a mortal sin.”

As he toyed with ending his life in this dramatic fashion, he suddenly pulled over on 82nd Avenue and gave himself up. God was at work to keep him alive. The police subdued him with club blows and hauled him off to jail. 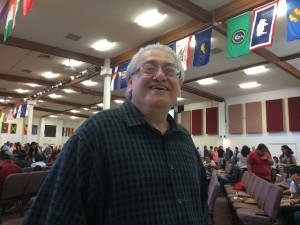 At his current church, the Door Christian Center, in Tucson

After a rehab and court dates, he decided to leave California and move to his brother-in-law’s corn farm near Cornell, Washington. But with his ongoing drug use, he felt estranged from them. Eventually, the loneliness of being 36 miles away from people, the frustrations of feeling unloved by his family and his continuing addiction all drove him towards suicide.

He found a shotgun and stuck the barrel in his mouth. When he was about to pull the trigger, the phone rang “out of the blue.” Rringgg, rrinnggg, rrringgg. Should he answer? Why…What’s the use?

Poised at the edge of eternity, he reluctantly picked up the phone. It was a woman inviting people to church. Since his brother-in-law’s family wasn’t home, would he go? Improbably, he put down his gun and agreed to attend church. It was a lifeline from heaven!

When he arrived at church he felt very uncomfortable. After the sermon, the preacher, a former street thug, called any unsaved to the altar to accept Jesus. “I just felt God sending me to the altar,” Mackowiak said. “I got God.” He surrendered his life to Jesus Christ as Savior and Lord and was born again.

Almost immediately, Mackowiak felt the love of God expressed through the members of the church. “Everybody was so happy in that church,” he recalled. “Everybody was so kind. They would invite me out to dinner and lunch. I had to tell them to stop because I was getting overweight.” Accepting Christ, however, didn’t mean shaking off drugs was a slam-dunk. “I did love God, but I kept messing up,” he said.

He moved to Tucson, where he joined Victory Outreach Ministries for three years. But he kept “sneaking off” to use heroine and cocaine.  He led a disturbing double life. Every time he used drugs, he was afraid he would die in sin. “I was so scared,” he recalled.

Then he transferred to the Door Christian Center, where he asked Pastor Harold Warner to pray for him to break the heroin addiction. “I felt the heroin leave me,” he said, after their prayer together.

Through the years as he continued to grow in God’s Word, he began to shed other drugs, like marijuana.
“I started hating them,” he said. “God just made me hate it so bad that I just wanted to quit.”

Later  Phil got married and started working in ministry. Today he plays timbales in an evangelistic music group. It’s been a long and difficult journey, and it’s not over yet.

Imagine one day wanting to kill yourself and several years later realizing how very happy and blessed you have become? John 3:16 is where God reminds us, “He loves the world so much, that he gave His only begotten Son, that whosoever would believe in Him, would have everlasting life.” If you’ve never really understood that often quoted verse from the bible I ask you to read it in context by starting at the beginning of John and reading straight through to the end.

Start by realizing how very much God does love you and ask Him to forgive you for ignoring that love which He has given to you throughout your life. Say a simple prayer something like this:

Jesus, please forgive my sin. I know I haven’t done everything that I should with my life and I’ve often ignored your attempts to be a part of it. I know that you died for me and that you have a plan for my life. Please teach me your ways and help me to live my life for you, free from the fears of this world and the next. I want to be ready for eternity with you. Amen

Congratulations, if you have prayed this prayer, the Bible says, “ Therefore if any man [be] in Christ, [he is] a new creature: old things are passed away; behold, all things are become new.” (2Cr 5:17)