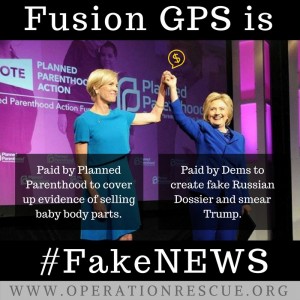 “Fusion GPS, the research firm hired by the Clinton foundation to create the controversial ‘Trump Dossier’, was also hired by Planned Parenthood to discredit the Center for Medical Progress (CMP) according to Liberty Counsel which represents CMP. The pro-life group sparked a media firestorm in 2015 after David Daleiden and Sandra Merritt released undercover footage of Planned Parenthood officials allegedly discussing the illegal sale of aborted baby body parts.”

“From its connection to Hillary Clintons campaign to the publication of a graphic dossier about President Trump, Fusion GPS has become something of a major player in the Russia investigation. The political firm was behind the controversial dossier that contained numerous colorful but unverifiable allegations about Trumps connections to Russia. And that dossier got somebody ‘killed’, according to an attorney for Fusion GPS.

“‘Somebodys already been killed as a result of the publication of this dossier and no harm should come to anybody related to this honest work’, said attorney Joshua Levy in an Aug. 22 deposition made public.”

“Honest work”? The material created by Fusion GPS has been so completely discredited because it is a seamless fabric of lies, greater lies, and the ‘Mother of all Lies’!