George Borden, the father of a student at Alma Del Mar Charter School in New Bedford, MA, is speaking out against an activity his daughter’s second grade class took part in.

On Friday, students of Shabrina Guerrier were learning about citizenship and the First Amendment. This led to a class discussion on current events in the media, including the death of Michael Brown and the ensuring protests in Ferguson, MO.

Following the discussion, some of the 7-and 8-year-olds staged their own “protest” on a sidewalk near the school during recess. This outraged Borden, who also happens to be a New Bedford police officer. WHDH reports:

“’Having the children off school property without any parental permission slip is inexcusable,’ Officer George Borden said. ‘I found that extremely upsetting, multiple people I’ve spoken to felt the same way, I’ve shown them pictures of this.’” 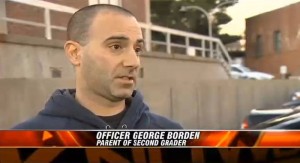 Borden added: “’I don’t think 7-year-olds can come up with the idea to go out and protest on the street.’”

Additionally, Borden feels this activity was more than just a class lesson, after he discovered a flyer advertising a protest that weekend organized against “unjust systems that allow police officers to kill Black men and boys with impunity.”

According to the school’s founder and executive director, Will Gardner: “’We discourage our teachers from sharing their own political and religious views with their scholars,’ Gardner said, adding, ‘we certainly want our scholars to engage in activities that help them to understand what it means to be citizens and what it means to be a democracy.’”

It’s one thing to teach students the value of speaking their mind and allowing them to formulate their own opinions. However, it is a whole different thing for a teacher to be imposing his or her own personal opinions on young minds eager to absorb information.