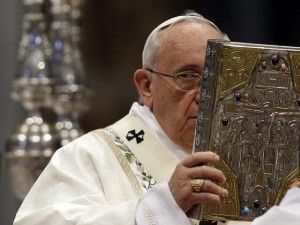 Humanity is currently experiencing a “climate emergency,” Pope Francis said, while decrying denial of human-induced climate change as a perverse attitude that endangers all.

“We need a conversation that unites us all, because the environmental challenge we are experiencing, and its human roots, affects us all,” Francis said in a statement to the COP23 UN Climate Change summit taking place this week in Bonn, Germany.

Four “perverse” attitudes that obstruct the quest for concrete solutions to the problem of climate change “range from denial of the problem to indifference, nonchalant resignation, or blind trust in technical solutions,” he said.

These perverse attitudes, Francis said, “certainly do not help honest research and sincere and fruitful dialogue on building the future of our planet: denial, indifference, resignation and trust in inadequate solutions.”

In his message, the Pope said that climate change is “one of the most worrisome phenomena that humanity is facing,” while praising the Paris Accord on reducing carbon dioxide as a “historic” agreement.

The agreement, he said, “indicates a clear transition path towards an economic development model of low- or zero-carbon consumption, encouraging solidarity and taking advantage of the close links between the fight against climate change and that against poverty.”

This transition was further prompted by the current “climate emergency,” which calls for greater commitment from the nations of the world, he said.

The Pope encouraged those meeting in Bonn, describing the proceedings as an “important phase of the Paris agreement.”

“In such a process it is necessary to keep the willingness to cooperate high,” he said.

While technical solutions to the problem of climate change are necessary, the Pope said, they are “not sufficient” without taking into consideration “the ethical and social aspects and impacts of the new paradigm of development.”

The Pope told the participants that they have a “serious responsibility to act without delay, in the freest way possible in relation to political and economic pressures, overcoming particular interests and behavior.”

The Pope ended his message by expressing his hope that the members of the conference will “consolidate the willingness to adopt truly effective decisions to combat the phenomenon of climate change.”

Last June, President Trump announced the withdrawal of the United States from the Paris Climate Accord, saying that it gravely disadvantaged American workers.

The U.S. will immediately “cease all implementation of the non-binding Paris Accord and the draconian financial and economic burdens the agreement imposes on our country,” he said.

“This agreement is less about the climate and more about other countries gaining a financial advantage over the United States,” he said.

Not long after, the World Council of Churches (WCC) censured the President for his decision, stating that the move “has grave consequences for the impoverished and vulnerable, for our children’s children, and for the entire planet, putting at risk people’s access to clean water, food, shelter and secure livelihoods, and undermining efforts for environmental sustainability and for peace.”

In assessing the reactions to the President’s decision, Washington Post columnist Charles Krauthammer said the hysterical response showed that it had become “an issue of almost religious belief” to the Left, while Minority Leader Rep. Nancy Pelosi (D-CA), said that Trump’s decision was a “dishonor” to God.

Last month, the prestigious Lancet journal revealed that pollution-related diseases were responsible for an estimated 9 million premature deaths in 2015, or some 15 times more than from all wars and other forms of violence combined.

While to date there has not been a single documented case of a person being killed by carbon dioxide related “global warming,” real pollution of air, water and land is killing an average of 25,000 people every day across the globe.

Pollution is not only the largest environmental cause of disease and premature death in the world today, the study in the UK-based journal found, but diseases caused by pollution are responsible for roughly 16 percent of all deaths worldwide—“three times more deaths than from AIDS, tuberculosis, and malaria combined and 15 times more than from all wars and other forms of violence.”

Despite the immense devastation wrought by pollution, the powerful of the world seem determined to ignore it in favor of an ideologically driven crusade against “global warming.”

“Despite its substantial effects on human health, the economy, and the environment, pollution has been neglected, especially in low-income and middle-income countries, and the health effects of pollution are under-estimated in calculations of the global burden of disease,” the Lancet stated.

This health damage from pollution “has particularly been overlooked in both the international development and the global health agendas,” the report declared.

While the Paris Climate Accord deals at length with reducing greenhouse gas emissions, it never once mentions the word “pollution” in the entire 27-page document.