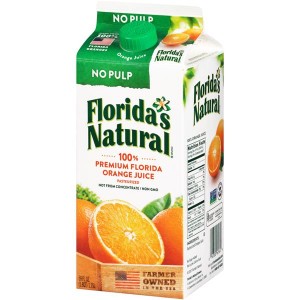 We recently reported on the disturbing finding that 100% of breakfast cereal samples tested by the Environmental Working Group tested positive for a known carcinogen. But, today, we’ll focus on the health risk associated with drinking orange juice from the wrong source.

A second round of testing on the most popular orange juice brands reveals a cancer-causing chemical – the herbicide, glyphosate – as the culprit. And one popular brand in particular (Florida Natural) contains the highest amount of this carcinogen compared to all other orange juice brands tested.

As you probably know by now, glyphosate is the most popular herbicide used by farmers. You may have heard about this carcinogen before in the major recent news story about the trial of Johnson v Monsanto. In this case, a terminally ill groundskeeper suffering from Non-Hodgkin’s lymphoma was awarded millions of dollars by a California jury after they found Monsanto guilty of distributing products containing glyphosate, including its signature product, Roundup®️.

But thanks to our 24-hour news cycle, most people seem to have forgotten about it. And in the mean time, major companies – including the popular orange juice brand Florida Natural – are still allowing their farmers to use glyphosate on their crops.

The result? This highly-toxic substance is contaminating food crops (like oranges) and making their way onto grocery store shelves – and our breakfast tables.

For instance, the nonprofit group Moms Across America just discovered that Florida Natural orange juice samples contained glyphosate at a concentration of 14.42 parts per billion. This is actually many times the level detected in 2017, which was “only” 2.14 parts per billion.

And with recent research showing that more people are testing positive for glyphosate than ever before, it’s sad to think that the American public is being exposed to this harmful chemical so regularly. Even if the level of glyphosate in some of these products are considered low or ‘non-lethal’ – it should still be considered unacceptable.

According to the International Agency for Research on Cancer (a branch of the World Health Organization), glyphosate is a definite carcinogen in animals and a probable carcinogen in humans. In addition to increasing the risk for Non-Hodgkin’s lymphoma and other cancers, research has revealed other harmful effects of this carcinogenic weed killer. For instance, this chemical has been shown to:

~ Contribute to the spread of chemical-resistant weeds

~ Promote the growth of invasive and toxic green algae

Bad for the environment, bad for crops, bad for you and your family. Staying away from products known to contain glyphosate and other herbicides is one of the best things we can do for our health.