“This is the statute of the law that the Lord has commanded: Tell the people of Israel to bring you a red heifer without defect, in which there is no blemish, and on which a yoke has never come.” (Numbers 19:2)

A possible parah adumah, a full red heifer, is attracting attention across the Jewish world as the cow, located on a small farm outside of Lakewood, NJ, is getting set to reach its second birthday, Hamodia reported. 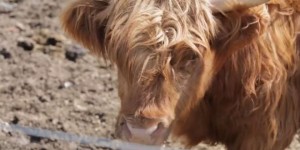 An extremely rare phenomenon, according to Jewish law, the cow would only become permissible for use after its second birthday, in which it will be fully inspected for any blemishes, included hairs that are not red.  A red heifer is necessary to make ash needed for the ritual purification process to carry out services in the Jewish Temple.

According to Celler, the cow was born on April 2, 2013 during Passover. The farmer explained that he has been “extremely vigilant” in making sure that the cow does not engage in any work or sustaining any blemishes, which may disqualify the cow according to Jewish law.

“My workers know that no one is allowed to even touch her,” he said.

The ref heifer, which is female, comes from a breed of cows indigenous to the Netherlands. She weighs between 500 and 600 pounds. Both parents are regular black cattle, although the mother, who is named Bonnie, does have some red hairs on her back legs.

According to Cellar, livestock breeders have ambitiously attempted to create red heifers via artificial means or generic manipulation. However, the red heifer’s red-brown eye color is one sign of the cow’s authenticity.

When asked why he doesn’t name the cow like his other livestock, Celler explained: “If you have to bring her for a korban (sacrifice), I don’t want to get attached.”

“A lot of people have been coming to see her,” Celler said. The red heifer is protected by an electrified fence to prevent visitors from getting too close. Some rabbis from Israel are supposed to come check her out sometime soon. This is a gift to the Jewish people.”