James Garfield, the 20th president of the United States, was a Gospel minister, thus clearly contradicting today’s errant notion that religious leaders are not to be involved with civil government. Sadly, few know much about Garfield partly because of the deliberate secularization of American history but also because of his short presidency.

Garfield was born in Ohio in 1831–the last president to be born in a log cabin. He grew up working on the family farm before going to work on a canal boat at age 16. An 1881 biography recounts an occasion when he unexpectedly fell into the river: 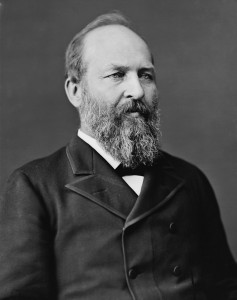 James was awakened out of a very sound sleep…He began to uncoil a rope to steady the boat through a lock it was approaching. The rope caught somehow on the edge of the deck and resisted several pulls that he made to extricate it. At last it yielded but, in the rebound, sent him headlong over the bow into the water…Death seemed inevitable. Fortunately his hand seized the rope in the darkness…and he drew himself, hand over hand, upon deck. He saw that he had been saved as by a miracle…’What saved me that time? It must have been God. I could not have saved myself’…During the time that he was thus reflecting he was trying to throw the rope so that it would catch in the crevice. Again and again he coiled the rope and threw it; but it would neither kink nor catch…It was but a few weeks after the last immersion before James was quite severely attacked by ague, a disease that prevailed somewhat in that region…The captain settled with James…and James started for home…As he drew near the house, he could see the light of the fire through the window…Looking in at the window, he beheld her [his mother] kneeling in the corner, with a book open in the chair before her…her eyes were turned heavenward; she was praying. He listened and he distinctly heard, “Oh, turn unto me, and have mercy upon me! Give Thy strength unto Thy servant, and save the son of Thine handmaid!’

His mother’s statement struck his heart, but it was two years later in 1850 before he became a Christian. Throughout his life, Garfield was involved in multiple career fields. He was self-taught in law, served as a Union military general in the Civil War, and was a member of the House of Representatives (where he was a key leader in passing numerous civil rights bills to secure racial equality), and he also served as an ordained minister during the Second Great Awakening.

One of the many unique items related to James Garfield in the WallBuilders’ collection is an 1858 letter in which Garfield recited details from a series of services he preached: We have just closed our meeting with happy results. There were 34 addition[s]. 31 by immersion…I have spoken 19 discourses in our meeting here.

President James Garfield was inaugurated president on March 4, 1881, and later that year on July 2, he was shot by an assassin. The doctors were unable to find and remove the bullet, and on September 19, 1881, he finally succumbed to the complications related to the medical treatment. (Interestingly, Alexander Graham Bell attempted unsuccessfully to find the bullet using a metal detector.)

Now more than ever before, the people are responsible for the character of their Congress. If that body be ignorant, reckless, and corrupt, it is because the people tolerate ignorance, recklessness, and corruption. If it be intelligent, brave, and pure, it is because the people demand these high qualities to represent them in the national legislature. . . . [I]f the next centennial does not find us a great nation . . . it will be because those who represent the enterprise, the culture, and the morality of the nation do not aid in controlling the political forces.

The life of President James A. Garfield should be an inspiration to Americans today, especially to Christians and Americans of faith.