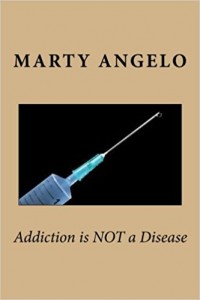 LOS ANGELES – “Addiction is NOT a Disease” is a book based on a magazine article Angelo wrote in 2009, entitled “It’s Called Sin, Doctor.” The article included Angelo’s insights on drug addiction after the tragic drug-overdose death of singer/songwriter Michael Jackson. The article took a very serious look at the root cause of substance abuse in today’s society.

Angelo revealed during a recent radio interview that his new book addresses “The age-old subject of sin; a word that I believe most modern day thinkers don’t want to contend with anymore. I consider acknowledging all substance abuse/drug addiction as ‘sin’ is an addict’s only hope for real recovery and transformation,” Angelo continued. “Once we acknowledge and confess our addictions as sin, we can then repent and receive forgiveness, cleansing, and overcoming power for all our troubled situations.”

Angelo is baffled that even today’s modern day Christian churches are now using secular sounding drug-treatment jargon in ministry. “It seems that for some unknown reason the word ‘sin’ has mysteriously been changed to disease or sickness,” Angelo reflected. “I feel once you remove sin from your vocabulary you lose all hope of ever leading a truly productive life. If sin is replaced with secular beliefs, lives can rage out of control and a true understanding of the Gospel becomes watered-down and eventually ineffective. The Bible clearly teaches us that Jesus Christ came to save us from our sins (John 1:29) and to give us a whole new life in Him and Him in us.”

Angelo’s book also lightly touches upon today’s futuristic dispensational end-time teachings as being one of the major reasons for the world’s current woes. “I feel futuristic thinking cause’s real damage,” Angelo states. “How can we successfully live today in the ‘now’… ‘The Present’… when we are too busy constantly waiting for a future earthly physical kingdom to come?” He goes into depth on this subject in three of his other nine published books available through Amazon.

Marty Angelo worked in the entertainment business from 1965 to 1980. He became a Christian in 1981 following a drug arrest and for over 35 year’s ministers in prisons, rehabs, and college campuses. He also conducts an outreach ministry to troubled celebrities. www.martyangelo.com/biography2.htm