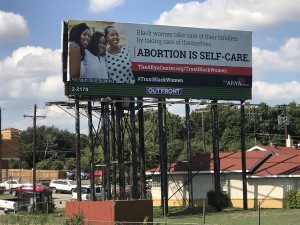 Hitting an all-time low, the pro-abort crowd has launched a new campaign targeting minorities, and you won’t believe the message they are delivering. Even worse, the new campaign is launched in billboard placements, plastered in strategic areas all around the city.

But the pro-choice crowds latest campaign reveals what Americans knew all along – the real racism behind the pro-abort movement. Abortionists will make you think they are “pro-minority” looking out for those who are oppressed.

As Mommy Underground previously reported, the most dangerous place for a black baby is inside its mother’s womb. Seeking to take advantage of this statistic, a local billboard campaign launched the most sickening pro-choice ad yet. There are actually billboards around Dallas telling black women that abortion is “self-care” hoping to make them feel comfortable with getting an abortion.

The billboard is sponsored by a group called the AFIYA Center, which claims to help black women and girls. But sprawled out in big bold letters are the horrific words “ABORTION IS SELF-CARE.” CBN reported: “Black women take care of their families by taking care of themselves,” the billboard reads. “Abortion is self-care”…

This ad is deceptive, and further adds to the genocide among black babies. Abortion harms women. Period. And it’s disingenuous to tell a mother that murdering her child, is “self-care.” But pro-abort groups like Planned Parenthood have long attacked the black community.

CBN continued: “In the early 20th Century, Sanger founded Planned Parenthood, an organization that later became the nation’s largest abortion provider. She encouraged abortion and sterilization to limit the size of black families.

“Margaret Sanger, the founder of Planned Parenthood, once said colored (sic) people are like weeds; they need to be exterminated,” Dr. Alveda King, director of Civil Rights for the Unborn, once told CBN News.”

The saddest part of all is that those in the black community think organizations like AFIYA and Planned Parenthood are there to help them. Abortion giants are determined to use anything possible, even deceptive billboard ads in order to kill innocent babies. They should be ashamed for preying on vulnerable women.

But as Mommy Underground has reported extensively, Planned Parenthood has racist ties. Even former Planned Parenthood workers admit to the racist undertone of its workers. Women who are pregnant need someone to walk alongside them and show compassion and care. True self-care is empowering women to know they don’t have to make the decision to kill their baby. They can either have the baby and or place the baby up for adoption.

But of course, abortion clinics lose money when women keep their babies, so their deceptive tactics will continue.