(WNS)–Pro-life advocates, led by Students for Life of America, on April 26 displayed almost 200,000 baby socks on the lawn in front of the U.S. Capitol to represent the number of Planned Parenthood abortions each year.

“These socks represent all the women betrayed by the abortion industry and their preborn babies who will never be able to wear the baby socks because of Planned Parenthood,” said Kristan Hawkins, president of Students for Life of America. “This generation wants to defund Planned Parenthood. They expect our elected officials to keep the promises they made during the election.”

Planned Parenthood aborted 323,999 babies in 2016 and receives around $500 million of annual federal funding. Students for Life wanted to collect enough socks to represent each baby aborted. After reaching more than half of their goal, pro-life advocates transported the socks in a moving truck to display outside the Capitol complex. They said it was time for lawmakers to defund the nation’s largest abortion provider. 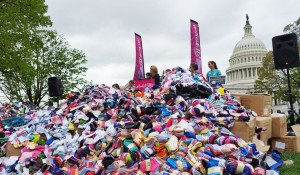 Sen. Ben Sasse, R-Neb., and representatives of other pro-life groups such as the Susan B. Anthony List and Americans United for Life joined Hawkins for the demonstration. Sasse said people don’t often realize the scale of Planned Parenthood abortions: “It’s just a devastatingly large number, and we need to have images like this so that people start to reflect on the magnitude of the suffering that’s happening out there.”

House Speaker Paul Ryan, R-Wis., promised at the beginning of the year to make defunding Planned Parenthood a priority for Republicans in Congress. And after clinching the Republican presidential nomination last year, President Donald Trump wrote a letter to pro-life groups vowing he would support taking away money from Planned Parenthood as long as it was performing abortions.

Congress is in the middle of working out a spending bill to fund government operations for the rest of fiscal year 2017. But with a Friday deadline, Republicans are not planning to enrage Democrats by stripping Planned Parenthood dollars from the funding plan because they need votes from across the aisle.

After displaying the baby socks on the lawn, Students for Life staff and volunteers carried 100 baskets of socks to Ryan’s office in hopes he would prioritize defunding Planned Parenthood during budget negotiations.