Proposed Iraqi Law Would Force Some Children to Become Muslim

(WNS)–Religious minority groups in Iraq are protesting a new law that would force some children to become Muslim.

Chaldean Patriarch Louis Sako of Baghdad urged Iraqi President Fuad Masum to reject the recently passed national charter, which could take religious freedom away from children and teenagers, the Catholic News Agency reported. Chaldean Catholics, Yazidis, Mandean, Kakai, and Bahai minorities all opposed the charter. Many protested on Nov. 4, according to the Assyrian International News Agency.

One article of the legislation states that children under 18 years old would have to become Muslim if their fathers convert to Islam or their mothers marry a Muslim man, according to Aid to the Church in Need (ACN).

In a Nov. 6, meeting, Sako urged Masum to veto the charter because the law would violate religious rights enshrined in the Iraqi constitution. 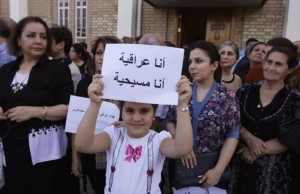 Iraqi girl holds a sign: ‘I am Iraqi. I am a Christian.’

“We want to assert the principle that the child should keep their religious affiliation, so that he or she can freely decide their faith, according to belief, when they come of age,” Sako said in statements published online. “After all, religion is a matter which concerns only the relationship between God and man, and should not be bound by any obligations.”

The United Nations recently affirmed the religious rights of children in a report delivered by Heiner Bielefeldt, special rapporteur on freedom of religion or belief.

“Every individual child is a rights holder in his or her own capacity as recognized in Article 14 of the Convention on the Rights of the Child,” Bielefeldt noted. “The interests of parents and children are not necessarily identical, including in the area of freedom of religion or belief,” the report went on to say.

The report condemned violations of the religious rights of children through any means, including forced marriages and forced conversions.

Because there is often government or community pressure not to convert to any other religion in Muslim countries, the Iraqi law “puts the children in a corner,” Fuentes said.

“Even if they think, ‘Okay, I’ll be Muslim now because it’s legal and switch when I’m 18,’ they can’t really do that,” she said.

Although Fuentes couldn’t assess how the law might be applied in Iraq, she said it might affect custody disputes. In other countries with Islamic governments or Sharia law, a man who converts to Islam and divorces his non-Muslim wife gets custody of their children.

Christians have been victimized by laws like this in other Muslim countries. Under Sharia law in Sudan, Meriam Ibrahim was considered a Muslim based on her absent father’s religion. That enabled authorities to imprison her for “adultery,” because she married a Christian, and apostasy for “converting” to Christianity. International pressure eventually led to her release.

Chaldean leaders in Iraq predict the new charter will accelerate the country’s Christian exodus, if enacted, CNA reported. Thousands have already fled the country because of persecution and threats from ISIS.