Pro-lifers around the country gather to remember a grim anniversary

Created Equal, a national pro-life organization headquartered in Columbus, Ohio, set up a small protest outside a Planned Parenthood facility there Oct. 14. About two dozen people attended the protest, the first wave in a weekend of similar gatherings across the United States to mark the 100th birthday of the abortion giant.

“It’s tragic that for 100 years this organization has stood against children and women,” said Mark Harrington, executive director and founder of Created Equal.

Harrington coordinated the protest in Columbus in partnership with #ProtestPP, a national coalition born last year in response to hidden-camera footage released by the Center for Medical Progress showing Planned Parenthood executives discussing the illegal sale of baby body parts. #ProtestPP organized nearly 130 local protests and prayer vigils for this weekend around the country and beyond, including one in Canada and one in London.

“At Planned Parenthood’s 100-year anniversary, tens of millions of Americans have now seen the shocking and callous way that this abortion factory’s top-level leaders scheme to make an easy and illegal profit off of tiny baby organs,” said David Daleiden, founder of the Center for Medical Progress and the investigator behind the hidden-camera footage. 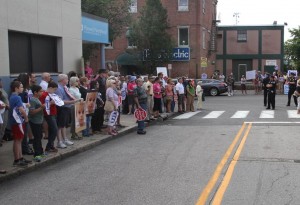 A recent protest at the Providence RI Planned Parenthood

At Friday’s protest in Columbus, Created Equal staff and supporters set up a barrier of large placards around Planned Parenthood of Central Ohio showcasing the bloodied remains of babies killed in abortions. One featured before-and-after photos of Marla Cardamone, a teenager who died of an infection after a legal abortion in 1989. The sign included a picture of her smiling, young, and vibrant face next to a graphic autopsy photo.

“I would agree they’re offensive, first of all,” Harrington said of the signs. “That’s because abortion’s offensive. They’re only a photo of the crime.”

Drivers-by throughout the morning played advocate and antagonist. It was difficult to distinguish the supportive honks from the angry, but obscene gestures and shouting gave occasional clues

In addition to the nationwide protests this weekend, pro-lifers on Twitter are using the hashtag #100YearsofAbuse to highlight the deathly work of Planned Parenthood.

In a small speech before leading off 15 minutes of silent prayer as the rally in Columbus neared its close, Harrington spoke about Planned Parenthood’s racist origins. (Founder Margaret Sanger was an outspoken eugenicist, famously dubbing poor and minority children “human weeds.”) Chuckling, he told the story of Eric Scheidler, executive director of the Pro-Life Action League, who reportedly sent “birthday cards” to Planned Parenthood facilities this weekend. The front of the card featured a birthday cake, but the inside showed a gruesome photo of an aborted baby and this message: “What about those who never get to have [a birthday]?”

According to Planned Parenthood, that includes roughly 320,000 babies every year. Harrington said that’s why the pro-life movement is necessary.

“It’s a sad day for America in the sense that it’s been 100 years that this organization has actually existed and has survived this latest scandal,” he said. “But the other side of it is true as well, and that is for the almost 40-some years since Roe v. Wade, we have not grown weary in doing good.”