(WNS)–Since 1983, Americans have set aside the third Monday in January to pay homage to Martin Luther King Jr.’s life and work. But for many, this year is different.

This week marks the last days in office for the country’s first African-American president, and in fewer than 100 hours, President-elect Donald Trump will take over as the nation’s 45th commander in chief. Some people angry and frustrated by the transition took to the streets of the nation’s capital to protest what they see as a repudiation of King’s legacy.

Carrying signs depicting Trump in Ku Klux Klan garb and a Hitler-style mustache, a few dozen Refuse Fascism protestors descended on the King memorial overlooking the Tidal Basin. Security guards quickly escorted them to the outskirts of West Potomac Park. Beating buckets with drumsticks and chanting “love trumps hate,” the group began to march up the National Mall to the newly opened National Museum of African-American History and Culture. 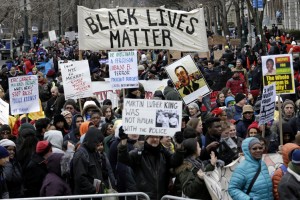 Raymond Watson, an African-American and Washington, D.C., native, laughed at the picketers as they marched away. Each year, Watson brings his two sons, now 10 and 12, to the memorial to snap a few photographs, strike up conversations, and reflect on King’s work.

“I want my kids to be able to experience this,” Watson told me. “We come down here and get to see all different kinds of people—that’s what it’s all about.”

Watson took selfies with his sons in front of the stone inscription from King’s “I Have a Dream” speech. They pointed their fingers up toward the famous quote: “Out of the mountain of despair, a stone of hope.”

Dozens of other families used the day off work and school to lay flowers at the base of the monument—including a handful of lawmakers and members of the incoming Trump administration.

Sen. Tim Scott, R-S.C., the Senate’s only African-American Republican, told me the United States needs to commemorate King by remembering the values he stood for.

“He really focused on the Matthew 25 approach and looking at those vulnerable classes and making sure they were represented in the halls of power,” Scott said. “He didn’t just do it for African-Americans, but for all people who were vulnerable. To me, that’s when he became dangerous in a positive way—when his message transcended race and focused on the needs of all people.”

Last week, Scott’s Twitter account went viral after he responded to a user calling him the N-word.

Scott told me it’s crucial, especially for persons in leadership positions, not to play into divisive rhetoric but redirect hatred.

“I think if somebody pokes your eye out and you poke their eye out, sooner or later you’re both blind,” he said. “We need to love those who persecute you and pray for those who want to abuse you. I think that has been my approach for a couple of decades, and I’ll try to keep it that way.”

Scott joined Vice President-elect Mike Pence and his family, who made a brief appearance at the memorial. Flocked by 10 Secret Service agents, Pence made his way to the front of the crowd to take a photo and drop off flowers. A few hecklers yelled questions.

“How will the Trump administration adhere to Dr. King’s ideals?” one person asked.

Pence never responded and left after shaking a few hands.

Before Pence’s visit, Watson told me it was time to set aside differences and pull toward a common goal.

“There’s a lot of tension in the world right now, but sometimes we need to set things aside and try to work together,” he told me. “There’s no need to be mad and say ‘Donald Trump this or Donald Trump that.’ Let’s see if we can all come together. I have faith in God, so I believe everything will come together in the end.”