Russian President Vladimir Putin has wound up his European trip to include the Austrian FM’s wedding ceremony and talks with German Chancellor Angela Merkel. The drop-in visit to Austria showed that Putin enjoys good personal relations with the representatives of Europe’s political beau monde. They see nothing odd in inviting him to social events, such as the wedding of Austrian FM Karin Kneissl, especially if the organizers want to grab the media spotlight.

This was followed by a summit with the German chancellor — the second time the two leaders have met in just over three months. The previous meeting took place in the Black Sea city of Sochi in May. The chancellor has visited Russia several times. 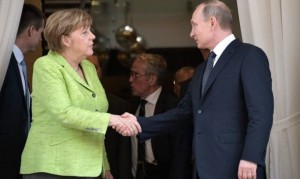 The “Meseberg Castle talks” in Germany were substantive and detailed, as Kremlin spokesman Dmitry Peskov has noted, but evidently important enough that few details were made public. For some time the leaders talked tête-à-tête without interpreters. They compared notes on Ukraine (including the prospects for a UN-sponsored peace mission and the EU’s new role of mediator), Syria (and the problems of its reconstruction), the US sanctions on Iran, and the future of the Nord Stream 2 undersea gas-pipeline project.

There were no agreements planned for the meeting, but the “America First” policy is pushing these two countries that are divided by their different views on international issues toward a closer cooperation. Russia can play a very important role in creating the right conditions under which the Syrian refugees could leave Germany and return home, thus mitigating that pressing problem. Syria’s reconstruction is opening up new opportunities for Russian-German cooperation.

President Putin and Chancellor Merkel discussed the idea of a meeting on Syria involving the leaders of France and Turkey as well as Russia and Germany. They agreed to launch new talks under this format. No date for that four-nation summit was set.

Some time ago, such a visit to Germany and Austria was hardly conceivable and any hope of reviving a dialog would have seemed far-fetched. The times are changing, reflecting the need to get that relationship back to normal. Conflicts and negative emotions are giving way to cool-headed, constructive approaches. Besides, Russia has demonstrated its ability to resist pressure.

Right on the eve of the Putin-Merkel summit, the Wall Street Journal published an article about the sanctions being prepared by the US to stop Nord Stream 2. It’s time for Germany to stand tall and continue to pursue that project. During the talks with President Putin, Chancellor Merkel said that’s exactly what she is going to do. A cursory look at history supports her position.

In the early 1980s the administration of US President Ronald Reagan was trying to prevent Western Europe and the Soviet Union from working together over energy. Sanctions were used as an instrument to force them into submission. Despite that, the “Brotherhood” pipeline (Urengoy-Pomary-Uzhgorod), also dubbed the Siberian pipeline or the Yamal project, was born in the heat of the Cold War. The framework agreement between West Germany and the USSR was signed in July 1981. Chancellor Willy Brandt’s Ostpolitik policy was continued, to everyone’s benefit. In November 1982, the sanctions were lifted, and on January 1, 1984, natural gas started to flow. The similarity between Yamal and Nord Stream 2 is obvious. Resisting pressure benefits the one who refuses to kneel.

Donald Trump is very critical of the German chancellor, whose government is not as strong as it used to be. The idea to withdraw American forces from Germany has recently been floated. The ongoing rift between the US and its European NATO allies opens up the question of the continent’s security.

Before the July NATO summit, the chancellor came out in support of President Macron’s initiative to create a European expeditionary force. It was Frank-Walter Steinmeier, the current German president and then foreign minister, who launched a European arms–control initiative in 2016. And it was West Germany who signed the Treaty of Moscow with the USSR in August, 1970 which contributed to détente. During the meeting with Vladimir Putin, Angela Merkel emphasized that disagreements with Moscow must be resolved through dialog. She feels that there are many conflicts that can be settled if the two nations cooperate.

Indeed, Russia and Germany historically have had a special relationship. They began cooperating economically and working to ease political tensions against the backdrop of confrontation between the West and East. They can do so again. The Meseberg meeting showed that both sides realize the importance of dialog and the need to avoid at all costs any return to the Cold War.