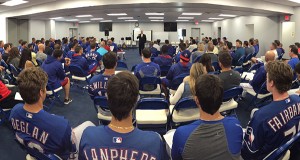 SURPRISE, Ariz. (BP) — For Major League Baseball players, coaches and fans, Opening Day is a time to look forward in anticipation of the season ahead. For North American Mission Board church planter Jason Griffin, it’s also a time to celebrate the work God has done during spring training.

Griffin, pastor of Phoenix-area Freedom Valley Church in Surprise, Ariz., serves as chaplain for the Texas’ Rangers Arizona facility in Surprise, where some 400 team personnel descend for spring training each February and March. Over four years of ministering to the Rangers, Griffin estimates 25-30 players and coaches have placed their faith in Christ as Lord and Savior and countless hours of discipleship have occurred.

Baseball chaplaincy “is a lot of opportunity,” Griffin, who serves under the auspices of the Baseball Chapel organization, told Baptist Press. “I’m amazed about what God is doing in the organization of the Texas Rangers.”

Among the highlights of Griffin’s ministry are housing players and their wives in his home each spring, leading team chapel services every Sunday for 30-60 players and coaches and being available for individual counseling at the ballpark at least five days per week.

During spring training, he also gathers daily at 6:30 a.m. for prayer and a devotional with about 15 coaches.

When Easter fell during spring training in 2016, the Rangers’ leadership agreed to shut down all baseball operations so players and staff had the opportunity to attend a 45-minute chapel service. The result was a service attended by 120 players and staff and led by Griffin along with the Freedom Valley worship and media teams. The service included a Gospel message and an invitation to trust Christ for salvation.

“The response was incredible,” Griffin said. “You had [Major Leaguers] just in tears about how God encountered them.”

He noted a “ripple effect throughout last year” of men coming to Christ in the minor leagues and Major Leagues as they grappled with truth from the Easter service.

On another occasion, Griffin was leading a Bible study with several players and a coach on Jesus’ conversation with Nicodemus in John 3 about being born again. At one point, Griffin was interrupted and asked “to stop talking and tell us how we can be born again.” Griffin did just that, and six men committed their lives to Christ on the spot.

Jon Edwards, a pitcher in the Rangers organization from 2012-15, lived in Griffin’s house during 2014 spring training and told BP the chaplain has a “pastor’s heart” for young players.

In Edwards’ case, that meant personal discipleship of Edwards and his wife Katelyn by Griffin and his wife Mindy, including Bible studies together and regular family worship. The Griffins replicate that ministry with at least one young couple each spring, attempting to strengthen their marriage in preparation for the rigors of professional baseball.

Griffin “connects with players,” said Edwards, who was traded to the San Diego Padres in 2015 and expects to be out of baseball this year recovering from elbow surgery. “He just lets them talk, and I feel like at the right time he just fills it in with the truth of the Lord.”

Citing a typical event from Griffin’s ministry, Edwards said the chaplain met a former Ranger at a coffee shop within the past month after the young man was cut from the team and led him to Christ.

Though 2017 spring training has come to a close, Griffin said his work with the Rangers will continue, as it does each year. He is also the team’s chaplain for extended spring training, rookie league, instructional league and fall league — all of which occur at the Arizona facility.

The 10 hours per week Griffin typically devotes to baseball chaplaincy during spring training reduce to between six and eight the rest of the year.

Extended spring training (for players deemed not ready for full-season competition) and rookie league (a 60-game summer league for newly drafted players) are among the most fruitful times for ministry, Griffin said. Players often have Sundays off, so Freedom Valley lets them borrow cars or bikes to attend church.

Last year, the congregation gave Bibles to each member of the Rangers’ rookie league team with their names engraved. Griffin was also given 15 minutes to tell the team why the church wanted them to have Bibles.

Though Griffin can tell many similar stories of ministry, he said the overall impact of his chaplaincy is impossible to quantify.

“Texas’ organization is incredibly saturated with guys who love the Lord and want to see their team come to Christ. I just find it a great privilege to partner with them,” Griffin said, noting Baseball Chapel facilitates similar ministry with all 30 MLB franchises.