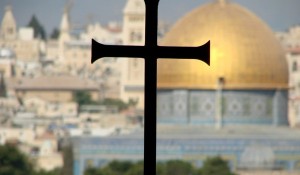 PADUCAH, Ky. — In the midst of politics, truth twisting, and occasional reports of religious persecution, the fact is that religious freedom in Palestine may go unnoticed by the western Christian world except for the efforts of a few. Although the official religion is Islam, the Palestinian Authority has officially embraced the individual’s right to choose one’s religion in contrast to what political foes might want the Christian world to believe.

The PA has recently removed religious classification from Palestinian ID Cards and supports Christian efforts led by at least one such evangelical as Terry McIntosh, a minister from Paducah, KY who recently hosted a series of public meetings in Palestine to include the Balata Refugee camp in Nablus. The PA has supported the McIntosh effort for peace and unity through Jesus Christ dating back to the early days of Oslo and Yasser Arafat.

Palestinian President Mahmoud Abbas recently issued the decision, confirming that religion will not be specified on Palestinian identity cards and passports, so that citizens won’t be treated based on their beliefs. The Palestinian Authority Interior Ministry in Ramallah has begun issuing identity cards for citizens that don’t specify the bearer’s religion. Religion was first included on Palestinian IDs in 1995 at Israel’s insistence.

According to Chief Palestinian Negotiator, Dr. Saeb Erekat, Palestine will see freedom of expression, accountability, transparency and women’s rights in his lifetime. McIntosh says that his work in country demonstrates the validity of that intent. “Thinking people realize that peace is realized quicker when each man is left to make his own choice about such personal issues as faith without fear of retribution. Both Christian and Islamic extremists will just have to accept the idea or risk jeopardy to themselves.”

Deputy Governor Jamal Rjoub publicly addressed the McIntosh team in Jericho and confirmed the need to pray for peace and to respect human rights in spite of any differences in faith.

McIntosh adds, “Another little known fact is that the Arab community is the strongest Christian voice in the Holy Land. Often, spin reports make it appear as though Palestinians are all members of an extreme Islamic sect bent on the destruction of Jews and Christians. The fact is that Christians serve in official positions of the Palestinian Authority. The PA agrees that if one chooses to be a Muslim, or a Christian, let him live in peace with his faith.”

McIntosh and his team seek to bridge the gap of political and religious divides, and calls upon both Palestine and Israel to do right before God. He says, “We believe the problem is spiritual resulting in political turmoil.” He has appeared on Palestinian TV several times.

PADUCAH, Ky. – A team of Christians from America led by Terry McIntosh, an enthusiastic advocate for Jesus Christ from Paducah, KY, are leaving indelible footprints on Palestinian soil in an unusual way. They recently spent time in the Balata Refugee Camp in Nablus during a recent visit to Palestine, followed up by a visit to Jericho where they conducted an open air campaign in the city center on May 20, with permission from the Palestinian Authority.

McIntosh and his team initially visited the people of Balata and witnessed the harsh conditions of the Palestinian people. The team hosted a meeting in the camp and celebrated God’s love for Palestine. He encouraged residents to seek the power they need from Jesus Christ, the One that God sent to save humanity.

McIntosh issued an international call to prayer on behalf of Palestine in the name of Jesus, whom he claims has miracle working power, and can help. McIntosh said that religious leaders must point the way to peace. He called upon Israel and Palestine to follow the Christ and commanded Israel to tear down the Separation Wall, to do right, and to seek peace with full rights for the Palestinians. He called upon Palestinians to seek peace and provoke Israel to jealousy because of their godliness.

The polemic evangelist may not make a lot of friends among some Christian circles, but his message resounds clearly among Palestinians. He says there is a growing number of Palestinians who realize the need for greater power in their lives, and Palestinian officials support the McIntosh team in their effort to tear down strongholds of ancient hatred between Jews and Palestinians. The fact that Palestinian officials, going all the way back to Yasser Arafat, lend support to McIntosh by permitting him to speak in public forums about such sensitive religious and political issues, adds to the puzzling example he sets.

Some Christian peers suspect that McIntosh has an agenda against Israel, otherwise he would not be permitted to speak openly. Not so, he says. “We have been so accused, but our agenda is to see both Jews and Palestinians living in peace through Christ, and each man to his own home without fear. Those who accuse us of anti-Semitism just can’t recognize the work of God when they see it, and they don’t like it when the PA demonstrates religious freedom. They are too bogged down in false religious theology, and think they are doing God a favor by supporting Israel, even when they do wrong. They do not realize that Palestinians are brothers with equal rights before God.”

That statement may send shivers down the spine of Jews and Christian Zionists, but McIntosh seeks to establish truth regarding the Israeli-Palestinian conflict, bridging religion and politics, and he wants to expose the falsity of contrary positions.

For one thing, McIntosh declares Israel’s security wall to be illegitimate and aggressively calls upon Israel to follow the Christ for security rather than depending on man’s wisdom.

He says, “Man’s wisdom supports the wall. However, it is contrary to the word of God. The theft of land to the harm of thousands of Palestinians is a crime. The Bible says, ‘Cursed is anyone who moves their neighbor’s boundary stone, and the prophet Hosea said ‘Judah’s leaders are like those who move boundary stones.’ If Israel would follow Christ, and treat Palestinians as the brothers they are, there would be cause for peace. Of course, Palestine must eliminate all criminal acts of terrorism intended to harm Jews. Biblically, the wall must come down. Our voice will withstand false accusations by those who support the wall, and our voice shall prevail as it is the will of God according to sacred writings.”

Regarding the radical Islamic religious view that all Jews must die, McIntosh disagrees. “There is room for Jewish Israel in the land, too, as God ordained for those who do right. It is no different for Palestinians. Both sides must conform to the way of God through Jesus Christ before peace can be realized. Once that happens, the two will become a force for good not to be reckoned with.”

Considering that Jews don’t believe in Jesus as the Christ, and that Muslim extremists have sworn to destroy Israel, the McIntosh team has its work cut out for itself. McIntosh says, “It’s not our job to bring peace, rather to proclaim and lift up the One who can make it happen, that is Jesus.”