“Humanitarian crises fueled by waves of terror, intimidation, and violence have engulfed an alarming number of countries in the year since the release of [USCIRF’s] prior annual report last May,” the report says. “The horrors of the past year speak volumes about how and why religious freedom and the protection of the rights of vulnerable religious communities matter.”

The report, which spans January 2014 to January 2015, is USCIRF’s 16th since Congress created the commission in 1998 to provide independent recommendations to the president, secretary of state, and Congress. True to form, USCIRF called on the State Department to dramatically increase its list of “countries of particularly concern,” or CPCs, from the current nine to 17.

The commission drew specific attention to five countries: Iraq, Syria, Nigeria, Central African Republic, and Burma, where widespread atrocities have taken place. Of those countries, the State Department listed only Burma, also known as Myanmar, as a CPC in its report last year, which drew criticism for several omissions. The commission also recommended adding Pakistan (for the 14th straight year), Egypt, Tajikistan, and Vietnam as CPCs. 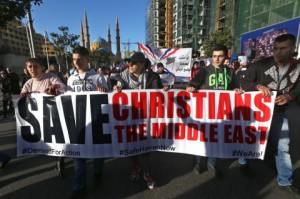 The commission expressed its support for the International Criminal Court to investigate ISIS violations in Iraq and Syria against religious and ethnic minorities. In those two countries, ISIS-related violence has internally displaced some 8.5 million persons—many of them Yazidis and Christians—plus another 3.3 million who have fled to neighboring states.

Militant violence has displaced some 1 million persons in both Nigeria, where Boko Haram has taken control of a large swath of land, and Central African Republic. The report called for immediate “emergency action” to address the growing humanitarian crises.

The report drew attention to the January terrorist attacks in Paris as a warning sign to Western nations.

“All nations should care about abuses beyond their borders not only for humanitarian reasons but because what goes on in other nations rarely remains there,” said USCIRF chair Katrina Lantos Swett. “In the long run, there is only one permanent guarantor of the safety, security, and survival of the persecuted and vulnerable. It is the full recognition of religious freedom.”

The commission also recommended the State Department update its approach to include non-state actors operating in countries that lack the will or ability to stop them—such as ISIS and Boko Haram. Rep. Chris Smith, R-N.J., is taking the lead on bipartisan congressional action to codify such a change, along with a five-year reauthorization of the 1998 law that created the commission.

Katharine Gorka, president of the Council on Global Security, a group that advocates for persecuted Christian minorities, praised USCIRF’s nonpartisan work and said it helps keep the U.S. government accountable.

“The USCIRF report is very important, and it has become even more so because the trend in the State Department is to provide less analysis,” she said. “The State Department toes the line of the government, whereas USCIRF, being independent, can be more critical and honest.”