“America will flourish as long as our liberty, and, in particular, our religious liberty is allowed to flourish,” Trump said at the Washington Hilton Hotel on Feb. 2. “Freedom of religion is a sacred right but it is also a right under threat all around us.”

Since 1953, every U.S. president has attended and spoken at the breakfast. This year brought together a crowd of more than 3,000, representing all 50 states and 140 countries from around the world. Trump’s speech came amid worldwide protests over his recent order suspending the U.S. refugee resettlement program and limiting immigration and travel from some Middle Eastern countries.

Trump painted a bleak picture of the United States and the world but asserted faith in God brings people together. He did not mention his refugee executive order specifically but spoke openly about violent acts perpetrated by Islamic State (ISIS) militants. 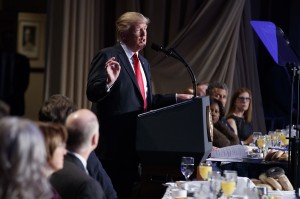 “We’ve seen a campaign of ISIS and genocide against Christians where they cut off heads,” Trump said. “All nations have a moral obligation to speak out against this violence.”

On immigration, Trump said he wants outsiders to come to the United States but “they need to share our values.” He said America is a nation of believers, adding spiritual success—not material wealth—will define “the quality of our lives.” Trump, who identifies as a Presbyterian, did not share much about his personal faith in his remarks, other than to say his parents raised him in a “churched home.”

The breakfast featured prayers and speeches from across denominational and party lines. Sens. John Boozman, R-Ark., and Chris Coons, D-Del., co-chaired the event and together laid hands on Trump to pray over him before he left the event.

Boozman and Coons also help lead the Senate’s weekly prayer breakfast. Coons said those gatherings are one of the few times lawmakers let down their guards.

“It’s a rare chance for all of us, at least around this town, to be human and find friends that we can trust,” Coons said with a laugh.

Barry Black, the Senate’s first African-American and Seventh-day Adventist chaplain, delivered the keynote address before Trump took the podium. Black gave a rousing message about God’s sacrifice in sending Jesus to die for the world’s sins and the power of going before the Lord in prayer. His impassioned speech brought the room to an extended standing ovation. Trump even joked afterward that Black should not worry about his job security.

Trump started his address with a joke that could pay out with more than laughs. He asked everyone to pray for Arnold Schwarzenegger so ratings of his show The Apprentice would improve. Schwarzenegger responded on social media, feeding buzz the show would not otherwise have had. The Apprentice, returning to NBC after a two-year hiatus with Schwarzenegger as host, helped make Trump a household name, and he retains rights as executive producer, earning an undisclosed per-episode royalty.

Trump did not mention any plans for new executive orders but did reaffirm his commitment to repealing the Johnson Amendment. The law allows the Internal Revenue Service to revoke a church’s tax-exempt status for endorsing political candidates.

“I will totally destroy the Johnson Amendment and allow our representatives of faith to speak freely,” Trump said.