Remarks by President Trump at the 47th Annual March for Life

Provided by The White House 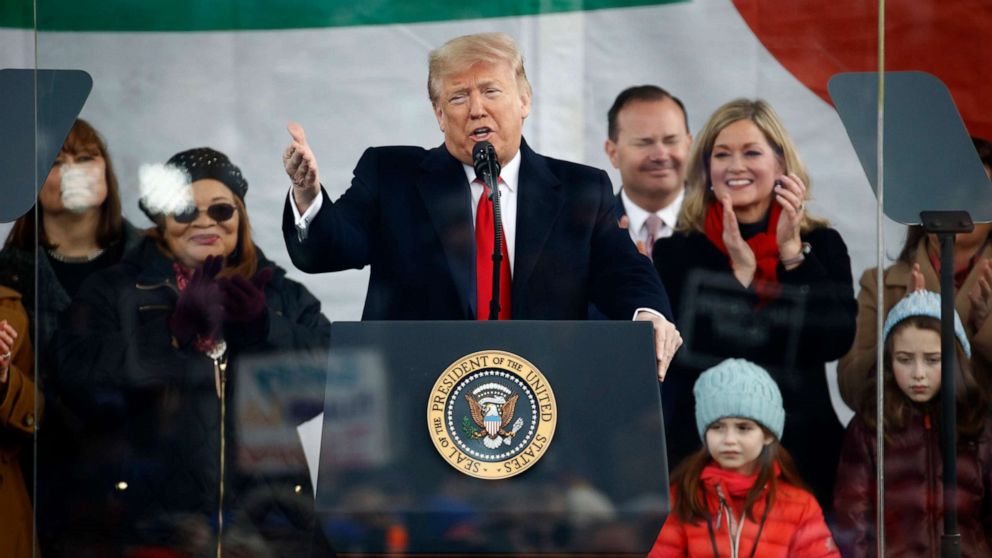 WASHINGTON, D.C. – The following is a transcript of remarks made by President Trump at the 47th annual March for Life on the National Mall:

THE PRESIDENT: Well, thank you very much and thank you, Jeanne. It is my profound honor to be the first President in history to attend the March for Life. (Applause.) We’re here for a very simple reason: to defend the right of every child, born and unborn, to fulfill their God-given potential. (Applause.)

For 47 years, Americans of all backgrounds have traveled from across the country to stand for life. And today, as President of the United States, I am truly proud to stand with you. (Applause.) 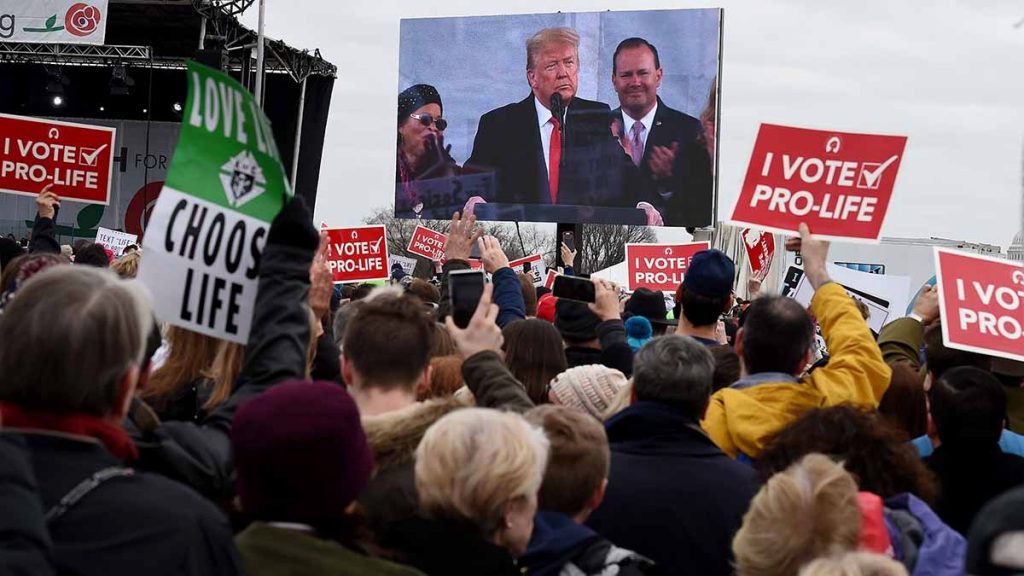 I want to welcome tens of thousands — this is a tremendous turnout — tens of thousands of high school and college students who took long bus rides — (applause) — to be here in our nation’s capital. And to make you feel even better, there are tens of thousands of people outside that we passed on the way in. If anyone would like to give up their spot, we can work that out. (Laughter.) You have a tremendous group of people outside. Thousands and thousands wanted to get in. This is some great success. (Applause.) Young people are the heart of the March for Life, and it’s your generation that is making America the pro-family, pro-life nation. (Applause.)

The life movement is led by strong women, amazing faith leaders, and brave students who carry on the legacy of pioneers before us who fought to raise the conscience of our nation and uphold the rights of our citizens. You embrace mothers with care and compassion. You are powered by prayer, and motivated by pure, unselfish love.

You’re grateful — and we are so grateful — these are incredible people — to be joined by Secretary Alex Azar and Kellyanne Conway. (Applause.) Thank you.

And I have to say — and I look at it — I see it exactly — we have many, many more politicians in the audience. But, if you don’t mind, I won’t introduce them all. (Laughter.)

All of us here today understand an eternal truth: Every child is a precious and sacred gift from God. (Applause.) Together, we must protect, cherish, and defend the dignity and sanctity of every human life. (Applause.)

When we see the image of a baby in the womb, we glimpse the majesty of God’s creation. (Applause.) When we hold a newborn in our arms, we know the endless love that each child brings to a family. When we watch a child grow, we see the splendor that radiates from each human soul. One life changes the world. From my family — and I can tell you, I send love and I send great, great love.

And from the first day in office, I’ve taken a historic action to support America’s families and to protect the unborn. (Applause.) And during my first week in office, I reinstated and expanded the Mexico City Policy, and we issued a landmark pro-life rule to govern the use of Title X taxpayer funding. (Applause.)

I notified Congress that I would veto any legislation that weakens pro-life policies or that encourages the destruction of human life. (Applause.)

At the United Nations, I made clear that global bureaucrats have no business attacking the sovereignty of nations that protect innocent life. (Applause.)

Unborn children have never had a stronger defender in the White House. (Applause.) And as the Bible tells us, each person is “wonderfully made.” (Applause.)

We have taken decisive action to protect the religious liberty — so important. Religious liberty has been under attack all over the world, and, frankly, very strongly attacked in our nation. You see it better than anyone. But we are stopping it, and we’re taking care of doctors, nurses, teachers, and groups like the Little Sisters of the Poor. (Applause.) We are preserving faith-based adoption. (Applause.)

And to uphold our founding documents, we have confirmed 187 federal judges — (applause) — who apply the Constitution as written, including two phenomenal Supreme Court Justices: Neil Gorsuch and Brett Kavanaugh. (Applause.)

We are protecting pro-life students’ right to free speech on college campuses. (Applause.) And if universities want federal taxpayer dollars, then they must uphold your First Amendment right to speak your mind. And if they don’t, they pay a very big financial penalty, which they will not be willing to pay. (Applause.)

THE PRESIDENT: Together, we are the voice for the voiceless. When it comes to abortion, Democrats is a — and you know this, you’ve seen what’s happened — Democrats have embraced the most radical and extreme positions taken and seen in this country for years, and decades — and you can even say “for centuries.”

THE PRESIDENT: Nearly every top Democrat in Congress now supports taxpayer-funded abortion, all the way up until the moment of birth.

THE PRESIDENT: Last year, lawmakers in New York cheered with delight upon the passage of legislation that would allow a baby to be ripped from the mother’s womb right up until delivery.

THE PRESIDENT: Then, we had the case of the Democrat governor in the state of Virginia — the Commonwealth of Virginia.

THE PRESIDENT: And we love the Commonwealth of Virginia, but what is going on in Virginia? What is going on? The Governor stated that he would execute a baby after birth. You remember that.

Senate Democrats even blocked legislation that would give medical care to babies who survive attempted abortions. That’s why I’ve called on Congress — two of our great senators here, so many of our congressmen here — and called upon them to defend the dignity of life and to pass legislation prohibiting late-term abortion of children who can feel pain in their mother’s womb. (Applause.)

This year, the March for Life is celebrating the 100th anniversary of the 19th Amendment, which forever enshrined women’s rights to vote in the United States — (applause) — and given by the United States Constitution. Such a big event. (Applause.) 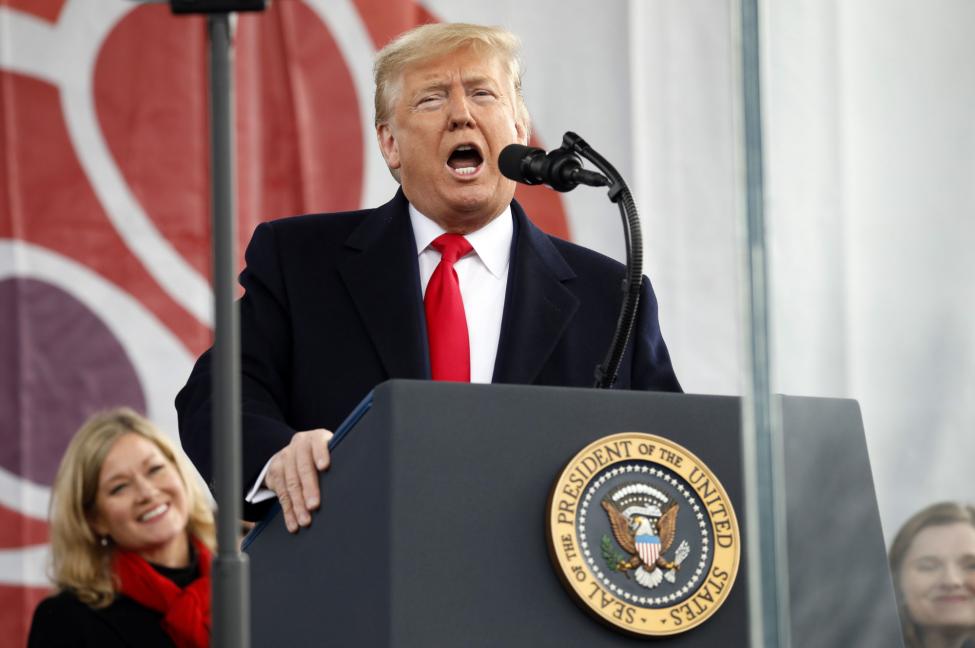 Today, millions of extraordinary women across America are using the power of their votes to fight for the right, and all of their rights, as given in the Declaration of Independence — it’s the right to life. To all the women here today: Your devotion and your leadership uplifts our entire nation, and we thank you for that.

The tens of thousands of Americans gathered today not only stand for life — it’s really that they stand for it so proudly together, and I want to thank everybody for that.

You stand for life each and every day. You provide housing, education, jobs, and medical care to the women that you serve. You find loving families for children in need of a forever home. You host baby showers for expecting moms. You make — you just make it your life’s mission to help spread God’s grace.

And to all of the moms here today: We celebrate you, and we declare that mothers are heroes. (Applause.) That’s true. Your strength, devotion, and drive is what powers our nation. And, because of you, our country has been blessed with amazing souls who have changed the course of human history.

We cannot know what our citizens yet unborn will achieve, the dreams they will imagine, the masterpieces they will create, the discoveries they will make. But we know this: Every life brings love into this world. Every child brings joy to a family. Every person is worth protecting. (Applause.) And above all, we know that every human soul is divine, and every human life — born and unborn — is made in the holy image of Almighty God. (Applause.)

Together, we will defend this truth all across our magnificent land. We will set free the dreams of our people. And with determined hope, we look forward to all of the blessings that will come from the beauty, talent, purpose, nobility, and grace of every American child.

I want to thank you. This is a very special moment. It’s so great to represent you. I love you all and — (applause) — and I say with true passion: Thank you. God bless you. And God bless America. Thank you all. Thank you. (Applause.)