Remember the Liberty! Almost Sunk by Treason on the High Seas 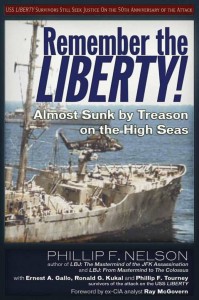 Phillip F. Nelson’s new book, Remember the Liberty! Almost Sunk by Treason on the High Seas,* seeks to out the American politicians responsible for the planning, execution, and cover-up of the Israeli attack on the USS Liberty in 1967. In tracing the planning of the June 8 attack back to 1965, Nelson has written a work that holds President Lyndon B. Johnson and Secretary of Defense Robert McNamara responsible.

One of the most explosive and hidden secrets in U.S. history – one that has never been previously told, Remember the Liberty explores how a sitting U.S. president collaborated with Israeli leaders in the fomentation of a war between them and their Arab neighbors, a war that would ensure a victory for Israel and include the acquisition of additional land.

This book identifies the real cause of the vicious attack on a U.S. Naval ship. After the botched plan was executed, the ship refused to sink even after being hit by a torpedo, leading the attack to be cancelled and a massive coverup invoked, including severe threats for the crewmembers to “keep their lips sealed.” That coverup is barely still in place, and completely exposed. Written largely by the survivors themselves, the truth is finally being told with the real story revealed.

In the annals of US military history, there are no doubt many unsolved and perplexing mysteries, but few could compare to the fate of the U.S. Navy spy ship that was mercilessly attacked by one of its closest allies intentionally and without warning. One of the reasons it is still a mystery is because it is also the only peacetime attack on a U.S. naval vessel that, to this day, has never been investigated by the Congress of the United States.

The USS Liberty was a 455-foot, 10,150-ton electronic intercept spy ship, originally a standard-design Victory Ship–a more evolved version of the World War II Liberty Ships–which were built as supply ships, not intended for direct fighting. The Liberty had been converted to an Auxiliary Technical Research Ship (AGTR), known colloquially as a “spy ship,” first deployed in 1965; its top speed was only 18 knots.

Yet the Liberty‘s fate, one of the most enigmatic, unresolved military mysteries of all time, is, paradoxically at its core, quite clear-cut and undisputed. The basic facts generally accepted by all are that, on the fourth day of the Six Day War between Israel and its Arab neighbors (Egypt, Syria and Jordan), the Israeli Defense Forces (IDF) savagely attacked the U.S. spy ship, the USS Liberty.

On the warm, sunny-bright day of June 8, 1967, starting at about 6:00 a.m., at least 12, possibly 13 Israeli aircraft of different types began surveilling the Liberty, some of which were only 1,000 feet or less in altitude, apparently to photograph and “map” her for later targeting purposes. The precision of the later attack could only have been accomplished through such pre-planning, specifically identifying the priority targets, starting with the gun mounts to render the ship defenseless, followed by all of the 45 different radio antennae and related transmitting equipment.

Beginning just before 2:00 p.m., three unmarked French-built Mirage III-C swept-wing fighter jets, without warning, settled into a triangular formation, aimed straight at the Liberty and proceeded to bore down on the ship in a fast low-level attack that began with rockets targeted at the four gun mounts and heat-seeking missiles aimed at the communications gear, with their warmed transmitters. When the attack was over, 34 men were dead and 174 were injured to varying degrees, some near death.

Unlike all other books ever written about the tragic attack – none of which provide a satisfactory explanation of what really caused it – Remember the Liberty! examines it in complete context of how it was positioned there by Johnson himself, for the very purpose of being attacked, and sunk, with every one of the 294 men on board going to the bottom of the Mediterranean Sea. His purpose was to use that event – while blaming Egyptian President Gamal Nasser for the attack – as a pretext for joining Israel in the war, even at the risk of igniting World War III with the Soviet Union. This book provides the only realistic explanation for why Lyndon Johnson did what he did, and why, in the heat of battle, he intervened with his Navy officers who were determined to rescue the Liberty and ordered them to recall the squadrons of fighter jets they had already dispatched – twice, 90 minutes apart – for that purpose.

When the heroic crew saved the ship from sinking, it stopped Johnson’s plan to join Israel in the war and thereby saved the world from certain nuclear conflagration. It also prevented his strategy of entering what he felt would be a “popular war” (unlike his other one in Vietnam) in order to give him a better chance to be re-elected president the following year. When that failed to materialize, so did his re-election campaign; ten months later he was forced to announce his decision to not re-run for the office that he had always considered his destiny.