Republicans Should Try Doing Something Popular 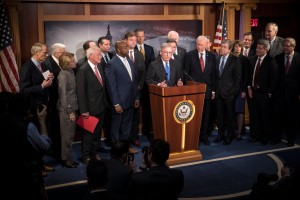 When the Titanic struck an iceberg, the crew might have rushed to the storeroom, grabbed the materials and spruced up the ship with a shiny new coat of paint. Women in their beautiful fur coats could stand on deck, admiring the lustrous sheen, as everyone pointed to it saying, “What a thing of beauty!”

The new paint job would have “succeeded” to the extent that it would make the Titanic more lovely, but today we would recognize that it might have been kind of beside the point.

Word has now reached us that congressional Republicans have passed tax reform. Everyone is standing around admiring the lustrous sheen, pointing to it and saying, “what a thing of beauty!”

The iceberg is immigration and the Titanic is our country.

Picking the battleground on which to fight is one of the most important advantages the ruling party has. But instead of choosing the fights that make Republicans heroes and Democrats swine, House Speaker Paul Ryan and Senate Majority Leader Mitch McConnell have decided to lead with the GOP’s least popular ideas.

They’re being bullied by rent-seekers, hucksters and people who don’t have America’s self-interest as their No. 1 concern — or in their top 20 concerns. Cheap labor advocates don’t actively hate America, like university professors do. They’re just indifferent to it. We wish you the best of luck getting re-elected, but in the meantime, we need more foreign workers.

If the Chamber of Commerce’s arguments were popular, they’d make them boldly and loudly! Instead, the mass immigration advocates make their case quietly behind closed doors. Republicans seem to be afraid of having the argument about immigration. What they ought to fear is NOT having that argument.

They need to hold months-long debates on building the wall, ending the anchor baby scam, shutting down sanctuary cities, restricting “refugees,” having a total immigration moratorium, and on and on and on. Not only will they be saving the country, but Republicans will also be bewildered by how popular they’ll be. Why haven’t we been talking about immigration for the past 20 years?

Didn’t everyone else just watch a reality TV star win the presidency by running on immigration? Imagine those same issues being pushed by you guys. Wouldn’t it be fun to be popular for a change? Whether out of cowardice or stupidity, Republicans keep pushing 10-to-40-percent-popular ideas, while leaving the 70-to-90-percent-popular ideas on the table.

Obviously, the GOP needs someone to tell them what is, and isn’t, a good idea. For a flat fee of $5,000 a week, I could do it. It would take me 10 minutes a day. I have a busy Christmas season (MERRY CHRISTMAS, FELLOW CHRISTIANS!), so until I can devote several minutes every day to this, here are some illustrations.

Congressional Republicans: We’re thinking of passing a behemoth health care bill that keeps Obamacare, but makes a few minor changes around the edges, sure to provoke SEIU protesters. Is this a good idea, Ann? NO.

Congressional Republicans: What if we do it behind closed doors without hearings? NO.

Congressional Republicans: Should we make a big effort to pass a resolution calling for sanctions on Iran? No. Bad idea.

Congressional Republicans: Really? Are you sure? YES. NEXT ONE.

Congressional Republicans: How about we adopt President Obama’s universally reviled idea of instant amnesty for any illegal who claims to have been brought here as a child, with no proof required? NO.

Congressional Republicans: What if we start impeaching judges who block enforcement of immigration laws? YES! Start right away.

Congressional Republicans: Should we earmark specific funds for a border wall, even though the president has full authority as commander in chief to build a wall without us? You should have done this Jan. 21. Hold lots of votes. Get Democrats on the record voting against a wall.

Congressional Republicans: Should we end the diversity lottery and chain migration policies that require us to take the rest of the world’s losers? YES! Great idea!

Inasmuch as McConnell and Ryan were terrified of not earmarking $18 million to “battle misogyny in the Marines” in the first budget passed by this GOP-controlled Congress, I’m inclined to think that there’s no hope.

But this is the season of hope! For your New Year’s resolution, Republicans, how about: “I will lose 10,000 pounds of unpopular ideas and demand debates on only our most popular ideas. I will start right away.”