Retaliation in MLB Must Stop

Pittsburgh Pirates star and reigning National League MVP Andrew McCutchen was hit by a pitch on Aug. 2. Ordinarily, that might not even have been a note in the game story the following day.

But it involved what baseball calls a “retaliatory” pitch and, the most important aspect of this situation, that the 95-mph fastball by Arizona pitcher Randall Delgado hit McCutchen in the back—and caused an “avulsion fracture involving the costochondral cartilage of the left 11th rib” according to a news release by the Pirates.

McCutchen went on the 15-day disabled list shortly after that and, even though he came back to play, he has been experiencing pain since the incident.

That McCutchen is humble, is beloved by most in baseball, and is considered by many in the game to be a genuinely good guy (and solid Christian), and that the Pirates are in playoff contention, didn’t help suppress the story—it only gave more attention to it.

What most fans were upset about is that it didn’t need to happen—the pitch was on purpose and was in response to an accident the night before when Arizona star Paul Goldschmidt was hit in the left hand by a pitch from Pittsburgh’s Ernesto Frieri. Goldschmidt’s hand was broken, so people knew McCutchen, because he was Pittsburgh’s star, would be targeted next.

The “retaliation pitch” has been part of baseball for a long time, but it’s unnecessary and makes grown men look like children on a playground.  There are at least three reasons we should be troubled by baseball’s lack of doing anything: 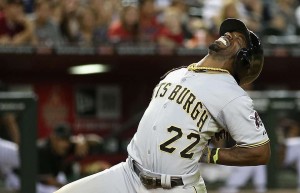 Andrew McCutchen After Being Hit By A Pitch

First, retaliation pitches could injure people. There’s no reason to do it. Accidents may happen, but purposely injuring people is criminal. Will it take someone having a career-ending injury, or even someone dying, to do something about it?

Hockey still hasn’t done much to curb fighting or brutal play, both viewed as part of the game, even though people have died. Canadian hockey player Don Anderson died on Jan. 2, 2009, after suffering injuries to his head during a fight, and Russian hockey player Dmitri Uchaykin died from a cerebral hemorrhage on March 31, 2013, after sustaining a hit to the head during a game.

Sanderson left behind his father, Michael, and mother, Dahna, who sobbed and collapsed into Michael’s arms at a memorial for their son. Uchaykin left behind his wife, Anna, who was pregnant at the time, and his daughter, Polina.

Second, the retaliation mentality sends the wrong message to children who watch what professional athletes do and then try to mimic what they see when they play. When I was a child, I would copy Joe Morgan’s cocking of his arm when he batted, Kent Tekulve’s submarine pitching style and Pete Rose’s batting stance.

Kids are impressionable, even with the fine details.

Third, as Christians, God tells us not to be vengeful and to leave all of that to Him (if He even needs to exact revenge at all). “Do not take revenge, my dear friends, but leave room for God’s wrath, for it is written: ‘It is mine to avenge; I will repay,’ says the Lord.” Romans 12:19

And why wouldn’t we listen to God? Doesn’t the Creator of the Universe know better and more than we would ever hope to know?

I do realize that not everyone is a believer and we can’t control others people’s actions, but we can control what we do, and we can allow people to see God in us, which is a greater example than not showing Christ in our lives by acting in a way that is against what He desires and commands.