STAFFORD, NJ – Retro Fitness club member and Long Beach Township resident Craig Fasler was escorted by a member of the Stafford Township Police Department out of the gym because an employee accused him of sharing his faith in public.

After completing his workout Mr. Fasler reports that he was in the locker room and noticed another male club member was in pain. Mr. Fasler asked, “Are you in pain?” The man told him that he was experiencing back and knee pain. Fasler asked, “Would it be all right if I prayed for you because Jesus will heal you right now?” 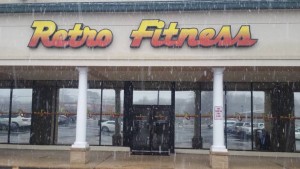 The man was open and received prayer for his pain. After the prayer, the man said that the pain was gone. Fasler continued with a conversation with another man who witnessed the incident in the locker room and shared his faith in Christ with him. Fasler encouraged the man to read a book about Christianity called “More Than A Carpenter” by Josh McDowell. This book has been read by millions of people around the world introducing people to a personal relationship with Jesus, according to Fasler.

Fasler reports that after the time in the locker room, he saw the man who witnessed the healing talking to another person near the counter. Fasler said to the young woman “ask him about Jesus removing the pain from his back and knee.”

Fasler responded “I was not talking about religion, but a person, Jesus.” The employee called the owner who instructed her to call the Stafford Township Police. The police arrived and Fasler was escorted out by a Stafford officer.

Fasler thanked the officer for being very professional and kind. He told the officer, “I don’t get it, there is a guy who had a sore back and knee. I asked him if he would allow me to pray for him. He said yes. I pray for him and he has no more pain. I thought that was a good thing?” Fasler told the officer “I am sorry that you had to be inconvenienced, this is nuts!”

Fasler concluded by stating to us that “the world is crazy, right is wrong and wrong is right. I pray for a guy, his pain is gone, mention the name of Jesus and I get the police called on me.”

He said that he will be back working out at the gym. Retro Fitness in Manahawkin refused to comment on this story.