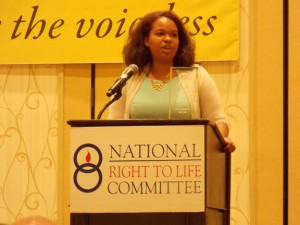 A senior at Masters Regional Academy in Smithfield, Miss Lamin earned the privilege of representing Rhode Island in the prestigious national contest by winning the Rhode Island Right to Life Dr. Mildred Jefferson Oratory Contest this past May in Providence.

The national pro-life oratory contest was held as part of the 45th Annual National Right to Life Convention, attended by many hundreds of right-to-life activists from around the country.

First held in St. Paul, Minn. in 1971, the annual National Right to Life Convention brings together grassroots leaders of the right-to-life movement to exchange ideas, share information, learn from leading national experts, and join together in the common goal of restoring legal protection for all innocent human life. 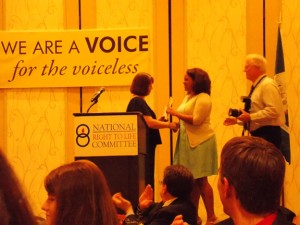 In addition to the $500 scholarship and trip to New Orleans she won in May from Rhode Island Right to Life, Miss Lamin won an additional $1,000 scholarship in the national contest and brings the 2015 first place trophy back home with her to Rhode Island.

“We are delighted,” said Rhode Island Right to Life executive director Barth E. Bracy, reacting from New Orleans, “that Little Rhody was so well represented here in the Big Easy. We knew in May that Miss Lamin was a dynamite speaker with a compelling message. I only wish I had placed a few wagers with the directors from the other states.”