This past January 19, the family of Rhode Island Right to Life executive director Barth E. Bracy was honored during the State of the Family Address hosted and delivered by Family Research Council President Tony Perkins at their Washington, D,C. headquarters. The Bracy family joined three other families from around the country who have also been wrongly harmed by, and who have taken a stand against, government imposition upon religious liberty and rights of conscience under President Obama. 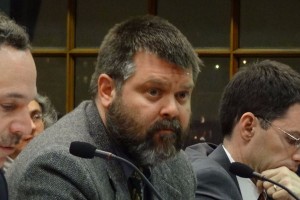 The Bracy family was invited to be recognized because of their Complaint against the Federal government and the State of Connecticut over the mandatory abortion coverage and fees in Access CT, Connecticut’s Obamacare exchange. Thier legal challenge, handled pro bono by the Alliance Defending Freedom, resulted in four new plans being offered on Access CT that exclude coverage for elective abortion and, thus, do not require enrollees to pay an abortion surcharge. Their victory led to similar cases being filed in Rhode Island and in Vermont.

“We enjoyed an edifying and delightful evening with our friends and colleagues at FRC and ADF,” said Bracy, “which, after the long drive, energized all of us for an activism-packed week in D.C. attending the March for Life and the National Right to Life board meeting.”