As tensions rise between Russia and the United States and Cold War fears return, Russia revealed a terrifying new addition to its nuclear arsenal, aptly dubbed Satan 2. Verses in the Book of Isaiah describing in detail what can only be nuclear destruction are suddenly relevant as never before as the hell weapon’s capabilities come to light. 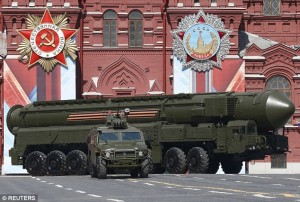 This week, Russia revealed that it had successfully tested the RS-28, a super-heavy thermonuclear armed intercontinental ballistic missile. Containing 16 warheads, the Satan 2 delivers a blast of 40 megatons, 2,000 times more powerful than the atom bomb that destroyed Hiroshima. It is capable of wiping out a landmass “the size of Texas or France,” according to a report by the Russian Sputnik news agency.

The delivery system has a range of over 6,000 miles at 4.3 miles per second, putting the East and West Coasts of the US within range. There are plans to incorporate Project 4202, a Russian hypersonic glider warhead carrier that can deliver the nuclear payload at an astonishing Mach 7, or over 5,300 MPH. It is doubtful that existing missile defense systems can cope with a threat travelling at such speeds.

Nuclear scenarios of the magnitude presented by this new weapon are hinted at in Biblical prophecy, most notably in Isaiah. His description of bomb shelters is clear. And men shall go into the caves of the rocks, and into the holes of the earth, from before the terror of Hashem, and from the glory of His majesty, when He ariseth to shake mightily the earth. Isaiah  2:19

He describes total destruction that arrives in an unnaturally swift manner, similar to the instant, total chaos of a nuclear bomb’s detonation. At eventide behold terror; and before the morning they are not. Isaiah 17:14

The prophet describes with disturbing accuracy nuclear winter, a period of abnormal cold and darkness following a nuclear war, caused by a layer of smoke and dust in the atmosphere blocking the sun’s rays. For the stars of heaven and the constellations thereof shall not give their light; the sun shall be darkened in his going forth, and the moon shall not cause her light to shine. Isaiah 13:10

The last chapter of Isaiah describes nuclear war in spiritual terms. For by fire will Hashem contend, and by His sword with all flesh; and the slain of Hashem shall be many. Isaiah 66:16

Rabbi Yosef Berger, rabbi of the Tomb of David on Mount Zion in Jerusalem, explained to Breaking Israel News that Isaiah was describing events that had no relevance in his time, and it is only becoming clear now what he was referring to. He gave another example.

“On the fifth day of Sukkot last week, we read in the special prayers, ‘A Hoshana (supplication) of three hours’. The Gaon of Vilna (the foremost Torah scholar of the 18th century) explained that this describes the war of Gog and Magog, which will take three hours to wreak its destruction, returning the world to tohu va’vohu (unformed and void),” Rabbi Berger explained.

“At the time he said this, this made no sense. Men did not have the ability to destroy the world, or attack distant enemies on a massive scale,” Rabbi Berger explained. “It was inconceivable that a war could be waged in three hours. The Gaon of Vilna was describing a situation that is only beginning to make sense now.”

“In the same way, Isaiah was using terms from his time to describe a situation which did not exist, but when we look at his words now, we can understand how they are absolutely timely and relevant,” said Rabbi Berger.

“Also, the motivations that would bring a country to create such a destructive weapon were inconceivable just a few generations ago,” he continued. “All this is possible to understand through prophecy, which sees this as part of a bigger picture: as the will of God. All the things the prophets wrote about, we are only beginning to see now as the precursor to the Messiah.”