Rwandan Genocide Survivor: God Used a Christmas Shoebox to Save Me as a Child 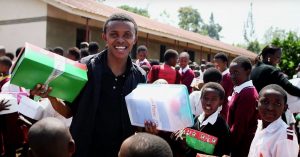 A man who fled the Rwandan genocide as a boy and who saw his life change when he received an Operation Christmas Child shoebox is now traveling the U.S. and encouraging others to fill shoeboxes this holiday season.

Alex Nsengimana’s family was killed during the 1994 genocide that saw as many as 800,000 people murdered. He was bitter and was blaming God, he said.  But during that tragedy, a small box – filled with gifts from Christians – gave him hope. He was 7 at the time.

“Both my grandmother and my uncle, the people who were taking care of me were killed during that war, and I would run from family to family,” he said at Calvary Baptist Church in Longview, Texas, according to KLTV. “By the end of the genocide I was put in an orphanage. And while I was in this orphanage, that’s when Samaritan’s Purse, the mother organization of Operation Christmas Child brought shoeboxes to us.”

Operation Christmas Child is an annual event in which volunteers pack shoeboxes with gifts – with everything from toiletries to toys – for children around the world. Samaritan’s Purse distributes the boxes.  Since the project’s first year in 1993, more than 150 million shoeboxes have been distributed around the world.

“Just having something that we could call our own – that we could play with and that could take our minds off of what happened during the war – receiving that shoebox was just the beginning of my faith,” Nsengimana said. “It reminded us that someone out there cared for us.”

Eventually, Nsengimana was adopted by a family in Minnesota. He is now married and living in the U.S. He even has returned to the Rwandan orphanage where he grew up. There, he distributed Operation Christmas Child shoeboxes to children.

“God is going to use that box,” he said while passing out the boxes. “… It reminds me how blessed I was when I received my box.” Life, he said, “is tough,” but “God is still faithful.”