Same Kind of Different as Me – Review 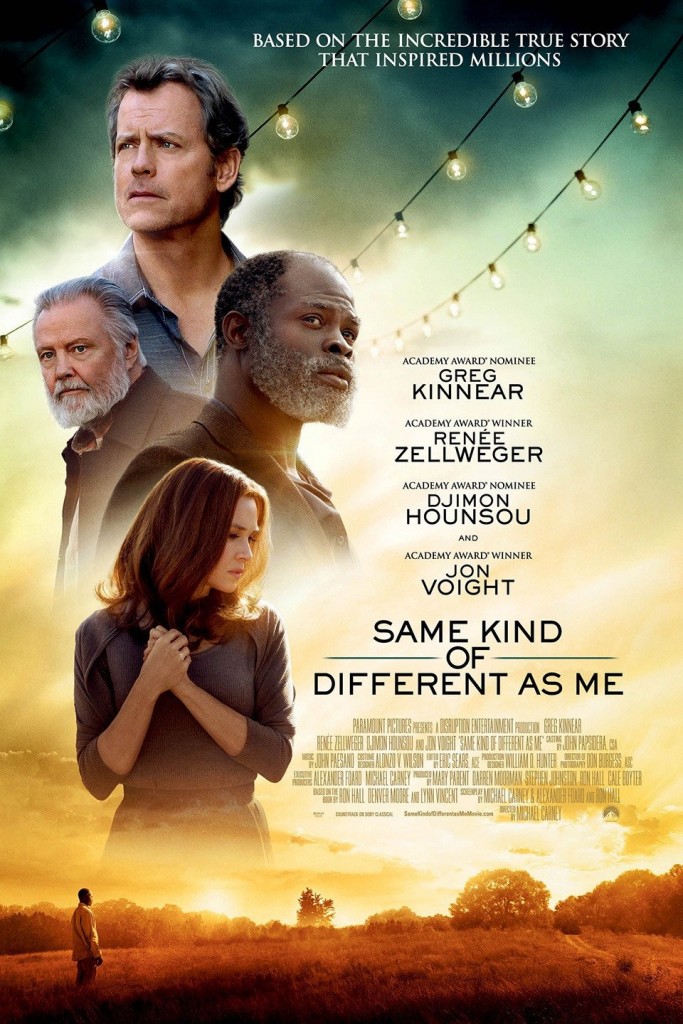 In one of the most touching films of the year, SAME KIND OF DIFFERENT AS ME tells the true story of a wealthy Texas art dealer who must move beyond his self-centered impulses to befriend a dangerous homeless man in order to save his marriage. Along the way, his faith-driven wife consistently sets a Christ-like example that transforms their marriage, family and community for the better. As a drama, SAME KIND OF DIFFERENT AS ME tackles the challenging issues of race and homelessness head on, and ultimately delivers a timely and hope-filled message of love and understanding to a world that continues to struggle with racial strife and tension.

Based on the book by the same name written by Ron Hall, Denver Moore and Lynn Vincent (HEAVEN IS FOR REAL), SAME KIND OF DIFFERENT AS ME is brought to the big screen by Paramount Pictures and directed by Michael Carney, who also serves as a writer along with Alexander Foard and Ron Hall.  The stellar cast features high-powered Oscar winners and nominees, including Greg Kinnear (LITTLE MISS SUNSHINE, AS GOOD AS IT GETS, HEAVEN IS FOR REAL) as Ron Hall; Renée Zellweger (BRIDGET JONES’S DIARY, JERRY MAGUIRE, CHICAGO) as Ron’s wife, Debbie Hall; Djimon Hounsou (BLOOD DIAMOND, GLADIATOR, GUARDIANS OF THE GALAXY) as Denver; and Jon Voight (DELIVERANCE, MISSION: IMPOSSIBLE, TRANSFORMERS) as Ron’s father, Earl Hall. 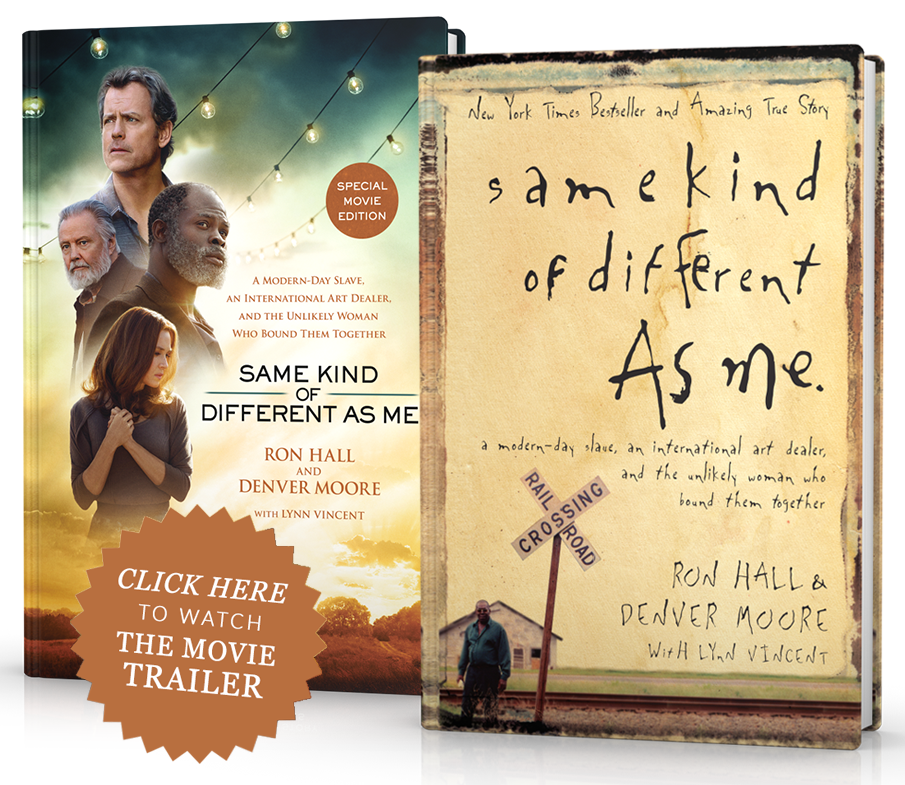 In the context of America’s ongoing racial tensions, SAME KIND OF DIFFERENT AS ME effectively speaks into the climate of rancor and divisiveness in a respectful, redemptive and inspiring way. From start to finish, Debbie’s Christian faith is front and center—but not in a preachy or overbearing way. And Denver challenges Ron to examine his motives in their friendship:  Is he in it for the long-haul, or not?

Here, serving the poor and needy is a major theme of SAME KIND OF DIFFERENT AS ME—with 1 Cor. 13 featured as the theme verse for the Union Gospel Mission where Debbie regularly volunteers. And while it’s unclear to what degree Ron ultimately embraces Christianity, it’s obvious that Debbie’s faith in action—forgiving Ron’s infidelity, leaving her life of comfort to serve the less fortunate, bravely facing a grim health prognosis—impacts him greatly.

Perhaps most importantly, the biblical call to live and love sacrificially like Jesus is clearly and effectively presented in SAME KIND OF DIFFERFENT AS ME.  Throughout the film, we see profound parallels between Debbie’s life and Jesus—she trusts in God’s sovereignty over her difficult situation, she gives in a self-sacrificing way that transformed Denver’s life and the lives of many others, and she treats everyone with dignity and respect. Indeed, it’s Debbie’s unconditional and persistent love that sets Denver free and unlocks the chains of his bondage. As Denver poignantly says, “God is in the recycling business of turning trash into treasure,” and this film portrays Debbie’s life as a reflection of Christ’s sacrificial love for a broken and angry world. And it is Debbie’s Christ-like love that fuels Denver’s plans to carry her torch forward—just like Christians are called to carry forth the Gospel of Jesus to the whole world.

There are three primary sets of relationships highlighted in SAME KIND OF DIFFERENT AS ME. First up is Ron and Debbie’s 19-year marriage, which is on life support as the story opens after Ron is forced to confess an affair. Understandably, Debbie is devastated, but she gives Ron the option to either leave their 15,000 square foot house, or definitively choose her and put in the hard work to rebuild their relationship. Ron chooses Debbie, and, to her credit, Debbie chooses to forgive both Ron and the other woman. From here, Debbie enlists an initially reluctant Ron to help her serve at the rescue mission, and through their time serving others together, Ron’s cynical heart begins to soften and their relationship begins to experience healing and restoration. Later, when Debbie faces a devastating health diagnosis, their love and care for one another continues to deepen in ways that depict grace, dignity, and love for their family and friends.

Next up is the key relationship between Ron and a homeless man named Denver, who is initially known by the name Suicide due to his violent and unpredictable behavior. While Ron is initially fearful of Denver, Debbie is not afraid to look him in the eye and show him respect. She encourages Ron to reach out to Denver, and the friendship between the two men grows as they spend time together and learn more about each other’s stories. Similarly, the lives of other rescue mission clients begin to turn around as their stories are told and they are shown unconditional love and care by volunteers who treat them with dignity as people made in Gods’ image. In one particularly beautiful scene, Debbie and a homeless woman named Claire bond when the gals give Claire a make-over.

Finally, the estranged relationship between Ron and his alcoholic, bigoted father Earl is presented. Because Earl is so difficult to get along with, Ron wants to have very little to do with him. While Ron loves his mother, who stoically continues to love and honor her husband, Ron is embarrassed by his father and reaches a breaking point when Earl ruins a Christmas family dinner with a racist rant and insensitive remarks about Debbie’s illness. In the end, Denver encourages Ron to reconcile with Earl, saying that “sometimes you just gotta bless the hell outta people, because some of us have a lotta hell in us to be blessed out.” 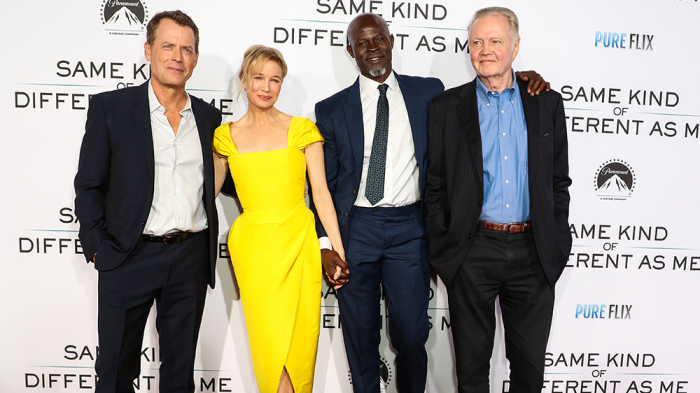 Overall, scenes depicted in SAME KIND OF DIFFERENT AS ME are very faith-compatible. Even though Ron Hall appears to have it all, he’s lost and unfulfilled by the riches of the world. And although he has an affair, the other woman is not shown nor is there anything suggestive depicted. Debbie forgives both Ron and the other woman, and Ron chooses Debbie over the other woman. From this point, Ron seems largely committed to doing what it takes to restore his marriage. And in Ron’s attempts to make things right, Debbie makes it clear that she doesn’t want to be showered with more nice things. Rather, she insists on Ron joining her in volunteering at the local rescue mission. Although Ron is largely disconnected from Debbie and their two children because he has chosen his lucrative career over his family, the time they spend together serving others brings helps bring the whole family together. Eventually, both their son and daughter begin serving at the mission, too.

In other notable situations, Debbie has a series of prophetic dreams—including Ron in a field digging a grave and a black man being followed into the woods. Later, Debbie also has a dream about a poor old wise man who changes the city. When she eventually meets Denver at the rescue mission, Debbie recognizes him as the man in her dreams.

At the rescue mission and in some of the surrounding neighborhoods, there are some scenes involving violence. Denver is a very angry man who often carries a baseball bat, which he’s not afraid to use—including bashing in Ron’s vehicle window one night. There is also a scene in which a homeless man dies on the streets and is taken away in an ambulance. Other scenes at the rescue mission depict mentally unstable clients who cause trouble and scare some of the volunteers, including Ron.

Eventually, Ron is confronted by a bat-wielding Denver outside the mission and asks him if he’d like to get something to eat. This marks the beginning of an unlikely friendship in which the two men eventually share more and more of their stories and learn to trust and respect one another. Denver tells the harrowing stories of his childhood growing up dirt poor as a sharecropper in rural Louisiana. Then, at an art gallery, a provocative image of a Ku Klux Klan member by artist Andres Serrano brings up traumatic memories from Denver’s youth—and resulted in Denver’s vow to never speak to white people again. Later, a racist encounter at Ron’s exclusive tennis club opens Ron’s eyes to both subtle and overt forms of racism among members of his own community.

All told, topics involving race are handled in gently and effectively. Both men harbor racial fears and views, which are not stereotyped, but are treated in a sensitive manner—and depict the characters maturing beyond their respective starting points while being transformed in the context of their deepening friendship.

In other key scenes, there’s a solid and clear presentation of the Gospel when Denver is baptized in a river as a child. And then later as an adult, Denver opens up and confesses to having murdered a man to Debbie and Ron. To their credit, they do not condemn or reject Denver, but rather love him unconditionally—modelling the Christian call to minister grace and mercy to those who confess their sins.

Finally, some of the most powerful scenes in the film involve Debbie dealing with her cancer diagnosis—including sweet and tender scenes of love, healing and family members savoring time together, often with no words spoken at all. And in a scene that will likely leave many viewers in tears, the clients of the mission pay tribute to Debbie one by one as Denver shares about her impact on his life.

At 120 minutes in length, SAME KIND OF DIFFERENT AS ME is rated PG-13 for thematic elements including adultery, violence and language, including use of the N-word and other racial epithets. There is also a scene in which Denver recalls a horrific experience in which some white men put a noose around his neck and drag him behind a horse after he tries to help a white woman change a tire.

As a film produced by a major studio and starring well-known and highly acclaimed actors, SAME KIND OF DIFFERENT AS ME is a major step forward for a faith-driven film. The quality of writing, direction, music and acting is top notch—with Zellweger and Hounsou delivering particularly powerful performances. Kinnear also very ably depicts Ron Hall in a realistic and grounded way. And given the timeliness of the subject matter, SAME KIND OF DIFFERENT AS ME should resonate very well with both faith-driven and secular audiences alike—making it one of a few faith-themed films to date that breaks out of the Christian box and speaks to the broader culture in an effective and impactful way.