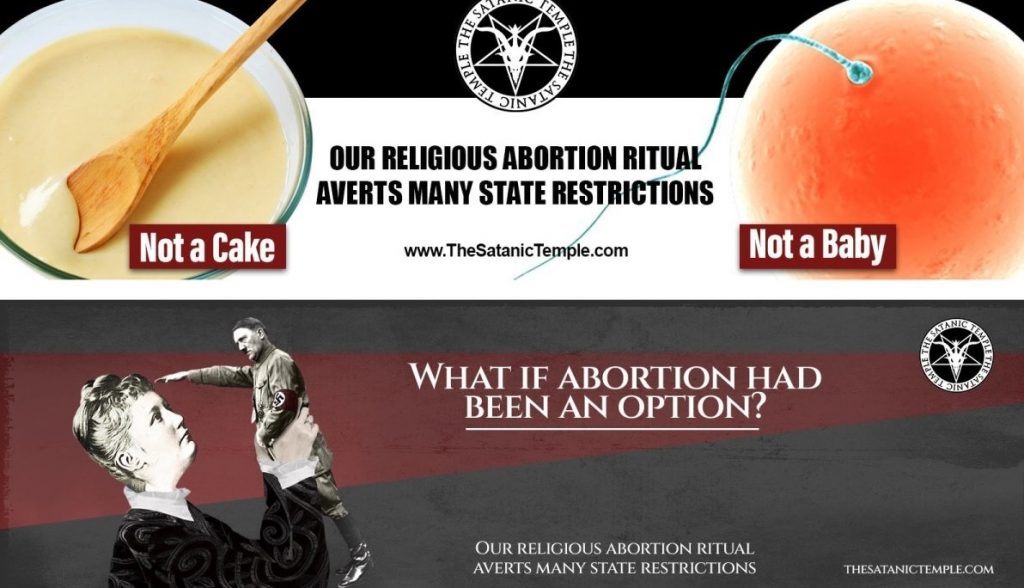 SALEM, Mass. — The Massachusetts-based Satanic Temple has filed a lawsuit against Lamar Advertising after it declined to run billboard displays in Arkansas and Indiana that promote the organization’s abortion “religious ritual.”

The Satanic Temple (TST), which identifies as non-theistic and views Satan as a metaphor for rebellion rather than an actual living being, says that it is suing Lamar Advertising for religious discrimination and breach of contract.

It states that it had contracted with the company to display eight billboards in Indiana and Arkansas, more specifically at locations near crisis pregnancy centers.

Lamar Advertising allegedly initially had no problem running the abortion advocacy billboards — that is, until they actually saw the designs that were to be run. It said that the four advertisements were “misleading and offensive” and declined to move forward with the contract.

One of the ads at issue depicts a woman (presumed to be Klara Hitler) holding Nazi leader Adolf Hitler and poses the question, “What is abortion had been an option?” Another claimed, “Abortion saves lives” and “Pregnancy complications are the sixth most common cause of death among women ages 20 and 34.”

All of the designs included the statement, “Our religious abortion ritual averts many state restrictions” and included TST’s logo and website URL.

Lamar Advertising does include a notation in its contract advising that it reserves the right to reject any artwork that it believes to be not “in good taste and in line with the moral standards of the individual communities in which it is to be displayed.”

However, TST Co-Founder Lucien Greaves, who also goes by the name Doug Mesner, argues in a statement, “While it is understandable to be concerned with forcing a private entity to engage in speech or conduct it objects to, this scenario is different. Lamar initially agreed to work with us and their rejection appears to be religiously based. In addition, they have a virtual monopoly in certain regions.”

“In this way, Lamar is able to regulate public-speech and they are not permitted to selectively exclude religious voices they object to,” he asserts.

As previously reported, two female TST members have unsuccessfully challenged state regulations in Missouri, with one court noting, “According to Doe, the Satanic Temple has both ‘politically aware Satanists’ and ‘secularists and advocates for individual liberty’ among its members. Arguably, her own description raises the possibility that her beliefs about abortion may be political, not religious.”

Therefore, the organization recently announced a “religious ritual” involving abortion, which appears to be an angled strategy to ensure that its acts are religious in nature and not merely political.

According to a letter TST created for mothers to present to abortion providers, the ritual involves placing oneself in a “meditative and contemplative state” and reciting certain tenets written by the organization.

“The abortion procedure is central to the ritual,” the letter states. “Throughout the process, I will place myself in a meditative and contemplative state and will focus my mind on diminishing my doubts and reinforcing my confidence in my ability to make decisions that affect my body.”

During the abortion, the third and fifth tenets of TST are to be recited. They state, “One’s body is inviolable, subject to one’s own will alone,” and “Beliefs should conform to one’s best scientific understanding of the world. One should take care never to distort scientific facts to fit one’s beliefs.”

Upon completion of the abortion, the mother of the now-dead son or daughter is to declare, “By my body, my blood; by my will it is done.”

The organization says that because the abortive act is now consequently linked to the performance of a religious ritual, any state laws and regulations that serve to be a “burden” on the woman’s religious exercise and “substantially interfere with … [those] practices” would violate the federal Religious Freedom Restoration Act (RFRA).

Psalm 10:4 says, “The wicked, through the pride of his countenance, will not seek after God. God is not in all his thoughts.”

Ezekiel 33:11 also outlines that God takes no pleasure in the self-destruction of the lost but rather desires “that the wicked turn from his way and live.”