Saved from the Occult

My testimony has to do with a holiday that marks the beginning of the annual holiday season. It is how I came to know the Lord and the type of environment from which I came. Every year on the 31st of October our town, city, and nation, and, in fact, most of the world celebrates a holiday that we call Halloween. Now, it hasn’t always been called Halloween. Many years ago in the Middle Ages it was known as “All Hallows Eve,” the eve of the Catholic celebration All Saints Day. But even back before then, in the years before our Lord walked the earth, it was known as the “Vigil of Samhain,” a god of the druids: the god of the dead.

It was during this time so long ago, according to the druid legends, the souls of the unholy dead would walk the face of the earth. They would wander the countryside stopping at the homes of the people living there begging gifts of food, clothing and money so that they could appease their god and ease their suffering. If they were given what they wanted it was believed that there would be a time of peace and prosperity. On the other hand, if the people did not give what they were asked for, the spirits would rise up in swift and sure retribution: homes would be burned, farm animals slaughtered and even innocent children would be kidnapped and sacrificed (for they believed even as we do, that the blood of a blameless and spotless sacrifice is sufficient for the remission of sin).

After several years of involvement in the occult during which I participated in séances, spell-casting, mind-reading and out-of-body experiences I was brought to a saving knowledge of the Lord Jesus Christ. I used the Ouija Board, that very popular game today, I read tarot cards, studied the Oriental philosophy of divination known as the “I Ching.” I learned to see and read a person’s aura, or that person’s life force. I also learned how to change that aura and to impose my will on that person. I had out-of-body trips during which my soul would leave my physical body and would travel wherever I chose it to and witness the things that I chose to see. I could read another person’s mind and I could project my thoughts into that person in an effort to control them and to accomplish the things that I wanted. I never openly worshipped the devil, but at the rate I was going it was simply a matter of time. 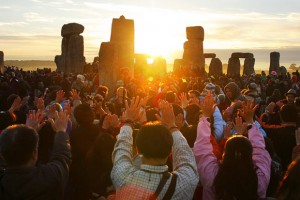 On 6/20/79 my then future wife, Karen, told me about Christ and led me to Him, and my life has not been the same since. Instead of a preoccupation with death I now have a joy of life. Instead of wanting to know about the devil and his works, I want to know about Jesus. Instead of telling my friends about last night’s séances and out-of-body experiences, I want to tell them about Jesus, and His love for them. Instead of celebrating the Vigil of Samhain, or Halloween, I celebrate Christ, the one and true God of life.

Now, what is sad is that every year our city and our land will celebrate this Vigil to Samhain. They will decorate their homes and businesses with black cats and pumpkins. They will hang pictures of ghosts and goblins about their houses and offices. Witches and broomsticks will be seen everywhere you turn. Parents will send their children out into the streets of the community to go house to house begging gifts.

What is even more saddening is that many churches, Bible-believing and God-honoring churches, will also decorate their halls with trappings of this day. Ghosts and goblins will share the same wall with the Cross of Christ. Witches with broomsticks and black cats will be seen next to Bible verses telling of the love of God. Right here in our own town a church-sponsored daycare hung cobwebs from the ceilings, and black spiders that crawled the walls. A skeleton greeted you as you walked through the door and a witch will bid you farewell as you left. All of this happens because Halloween is now considered an innocent holiday that is no longer the evil day it once was.

How can we as believers ever hope to turn this world toward Christ if we continue to give honor to the devil? How can we speak out against the evil of our day when we Christians depict the things of this evil on the walls of our churches, in our home, and in our businesses? What will we say to our Lord when He holds us accountable for the souls that were lost because we never spoke out?

“There shall not be found among you anyone that maketh his son or daughter to pass through the fire, or that worketh divination, or an observer of times, or an enchanter or a witch or a charmer, or a consulter with familiar spirits, or a wizard, or a necromancer. For all that do these things are an abomination to the Lord.”

And in Leviticus 20:6 we are told, “And the soul that turneth after such as have familiar spirits and after wizards to go a whoring after them, I will set my face against that soul and will cut him off from among his people.”

Paul tells us in Galatians 5 that witchcraft is one of the sins of the flesh and in verse 21 he tells us that they which do such things will not inherit the Kingdom of God.

For some Halloween may seem like a little innocent fun, but when we examine its roots we must ask, who is honored by it? If you are a Christian then the answer should be obvious. If you have been purposely following Satan and would like to change that, there’s no time like the present.

Romans 3:23 “For all have sinned and fallen short of the glory of God” Sin is breaking Gods Law the “Ten Commandments.” Have you ever told one lie, even a white lie?  Stolen anything even a pen or paperclip?  Hated someone?  Felt lust for someone that you are not married to?

If so then the Bible says that you have committed adultery in your heart!  Maybe you have misused God’s Name or not honored your parents. There are more but all you need to do is break just one and you have sinned. The Bible tells us that there will be a Day of Judgment.  On that day Jesus will separate the righteous from the rest.

God’s plan was that Jesus, the lamb that took away the sins of the world, would pay the price for our sin. “For God so loved the world that He gave His only begotten Son, that whoever believes in Him should not perish but have eternal life.” John 3:16

Please forgive me. I have sinned and recognize that I have been on the wrong path and need your forgiveness. I have ignored your Son Jesus and all that He has done for me. Please come into my life today and help me to live my life for you. I want to be assured of an eternal life in heaven.

In Jesus name, I pray.