Ocean temperatures continue to rise, and scientists are extremely alarmed as a mass die-off of sea creatures appears to be imminent.  This week, environmental experts were stunned when ocean water off of the San Diego coast hit an all-time record high of 81.3 degrees Fahrenheit.  Daily measurements began all the way back in 1916, and since that time a higher ocean temperature has never been recorded off of the California coast.  Unfortunately, this is not an isolated incident. Studies have shown that ocean temperatures have been rising rapidly all over the planet, and this has already had a devastating impact on many ecosystems.  The oceans are the foundation of the food chain, and if sea life starts dying off on a massive scale it could mean unprecedented famine all over the planet.

So I hope that people out there are taking this very seriously.  Our planet is going through dramatic changes, and the numbers don’t lie.  The reading of 81.3 degrees off of the San Diego coast was confirmed by two separate buoys… 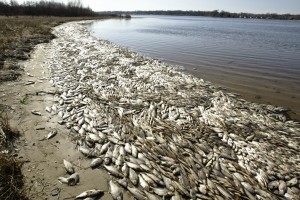 Two buoys off the coast of San Diego last week recorded what researchers believe could be the highest temperature ever measured in California waters.

A sea-surface temperature of 81.3 degrees was logged Thursday by both the Torrey Pines buoy (7.3 miles offshore) and the neighboring Scripps Nearshore buoy (.7 miles from the coast). The buoys are two of 25 managed by Scripps Institution of Oceanography in California.

81 degrees may not sound that high to you, but it is extremely unusual.

And other records have been set recently as well.  For example, a record high of 78.6 degrees was recorded at the Ellen Brown Scripps Memorial Pier on August 1st…

Scripps researchers have been taking daily measurements by hand at the Ellen Brown Scripps Memorial Pier in San Diego since 1916. On Aug. 1, a reading of 78.6 degrees Fahrenheit (25.9 degrees Celsius) was recorded, surpassing a previous high set during an unusually warm period in July 1931.

NOAA also operates a series of its own buoys off the California Coast, but they are unlikely to have ever recorded a temperature above 78 degrees because they are farther off the coastline than the Scripps buoys.

Some sea creatures are capable of relocating to areas with lower temperatures, but others are not. And those creatures “are in real peril” according to ecologist Michael Burrows…

Some free-swimming sea animals may shift their routines, but stationary organisms like coral reefs and kelp forests “are in real peril”, said Michael Burrows, an ecologist at the Scottish Marine Institute, who was not part of the research.

In 2016 and 2017, persistent high ocean temperatures off eastern Australia killed off as much as half of the shallow water corals of the Great Barrier Reef.

You may or may not be concerned with the fate of our coral reefs, but they are actually extremely important to our underwater ecosystems.

According to marine biologist Ove Hoegh-Guldberg, one out of every four fish on the entire planet “lives in or around coral reefs”…

“One in every four fish in the ocean lives in or around coral reefs,” said Ove Hoegh-Guldberg, a marine biologist at the University of Queensland. “So much of the ocean’s biodiversity depends upon a fairly small amount of the ocean floor.”

If all coral reefs were wiped off the map, we would have global famine starting almost immediately.

So what is causing this stunning rise in ocean temperatures?

Needless to say, many in the climate change community are blaming global warming…

Between 1982 and 2016, the number of “marine heat waves” roughly doubled, and likely will become more common and intense as the planet warms, a study released Wednesday found. Prolonged periods of extreme heat in the oceans can damage kelp forests and coral reefs, and harm fish and other marine life.

“This trend will only further accelerate with global warming,” said Thomas Frolicher, a climate scientist at the University of Bern in Switzerland, who led the research.

And now there is a hot new term for global warming that is really starting to catch on.

The term “Hothouse earth” was recently used in a study published by a research institute in Sweden, and it is becoming very popular…

Hothouse earth – aka ‘climate change’; aka ‘global warming’; aka ‘global climate disruption’; aka ‘global weirding’ – was invented by a bunch of activists at a hitherto deeply obscure scientific institution calling itself Stockholm Resilience Centre. Until they got a study published last week nobody – probably not even the people who work there – had heard of the place.

But because Stockholm Resilience Centre said all the right scary things about the imminence of global man-made climate doom, the left-wing media treated it like the voice of God.

Others are blaming another source for the stunning rise in ocean temperatures.

In recent years, I have chronicled the immense changes that our planet is going through.  Earthquakes are happening more frequently, volcanoes that were once dormant are springing to life all over the globe, and we are witnessing shaking in unusual locations.

Well, the same things are happening on the ocean floor.  Underwater volcanic eruptions are generating immense amounts of heat, underwater earthquakes are producing giant cracks in the crust of our planet, and magma from the core of the Earth is pushing up toward the surface. The ongoing eruption in Hawaii is an example above the surface of the water that we can see, but anything going on below the surface generally does not make the news.

These “Earth changes” are completely and utterly outside of our control, and there is nothing that we can do to stop them.  If they continue to get worse, ocean temperatures will continue to rise even higher, and that will be absolutely devastating to the global food chain.

This should be one of the biggest news stories of the year, but unfortunately the mainstream media is almost entirely ignoring it.