On Thursday, the BSA conceded those hard-won gains when its national president, Robert Gates, said the organization’s ban on homosexual leaders needs to be changed to “deal with the world as it is, not as we might wish it to be.”

At the annual Boy Scouts meeting in Atlanta, Gates said “the status quo in our movement’s membership standards cannot be sustained.” 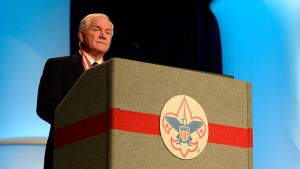 Gates’ speech and his call for change is not a surprise. When the Boy Scouts decided in 2013 to allow homosexual youth into the program, critics of the change said then the decision was unsustainable. John Stemberger, who ultimately left the Scouts to found a group called Trail Life USA as a Christian alternative to the BSA, said then the new policy “creates a myriad of problems” for the Boy Scouts. Andrew Walker of the Heritage Foundation said the BSA’s 2013 policy of allowing gay boys but prohibiting gay men displayed “willed naiveté on this issue.”   Gates himself seemed to agree when he said after becoming president of the BSA in May 2014 that he favored ending the ban on homosexual adult leaders.

The 2013 decision—which followed a year of controversy—had a devastating impact on the BSA. In 2012, the year before the first change in policy, the BSA had 2.66 million youth and adult leaders. According to its 2014 annual report, membership had fallen to 2.3 million—a drop of nearly 14 percent in just two years. And according to the BSA’s Form 990s for 2012 and 2013 (the last two years available), the organization has lost more than $80 million during that two-year period.

The Southern Baptist Convention, the nation’s largest protestant denomination, passed a proclamation at its last national meeting that encourages its churches to look for alternatives to BSA. TrailLife USA, organized in 2013, now has about 570 troops in 48 states, with 23,000 members, according to Mark Hancock, the group’s president.

In his Thursday speech, Gates said the decision by a New York BSA council in April to hire the nation’s first openly gay adult leader, Pascal Tessier, was a direct affront to the national policy and posed a potentially damaging legal and reputational threat to the Boy Scouts. Tessier has been a vocal gay activist, and he consulted with prominent lawyer David Boies, who has argued before the Supreme Court in favor of homosexual marriage. Gates said this development was one “I did not foresee and which we cannot ignore.”

But Jeremy Tedesco, an attorney with Alliance Defending Freedom, said everybody saw this coming.