Seattle Councilwoman Kshama Sawant: We ‘Will Not Stop Until We Overthrow’ Capitalism, ‘Replace It With’ Socialism 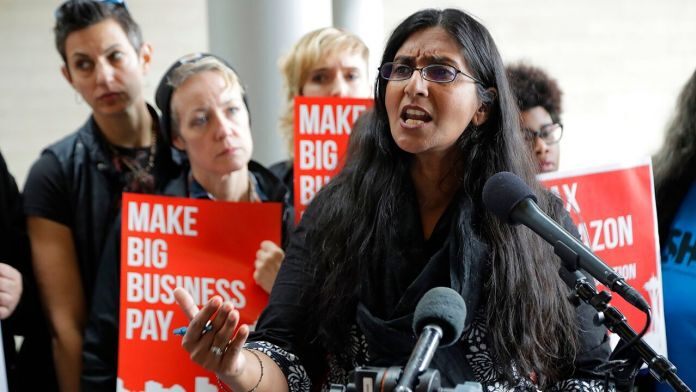 SEATTLE, Wash. — Video is circulating of Seattle Councilwoman Kshama Sawant declaring during a city council meeting that she and her colleagues wish to “dismantle” capitalism and replace it with “a socialist world.”

Sawant made her remarks after the city council passed 7-2 what is known as the “JumpStart Tax,” a payroll tax on the city’s largest corporations with at least $7 million in annual payroll, which includes the headquarters of Amazon.

Referring to capitalism as racist and sexist, as well as “deeply oppressive,” she vowed to come after Amazon founder and President Jeff Bezos if he gets in their way of carrying out their socialist plans. “I have a message for Jeff Bezos and his class,” Sawant began. “If you attempt again to overturn the Amazon Tax, working people will go all out in the thousands to beat you. And we will not stop there.”

“Because you see, we are fighting for far more than this tax,” she explained. “We are preparing the ground for a different kind of society, and if you, Jeff Bezos, want to drive that process forward by lashing out against us in our modest demands, then so be it.”

Sawant then outlined her plan to overthrow the system of capitalism with a socialist world. “[W]e are coming for you and your rotten system,” she warned. “We are coming to dismantle this deeply oppressive, racist, sexist, violent, utterly bankrupt system of capitalism, this police state. We cannot and will not stop until we overthrow it and replace it with a world based instead on solidarity, genuine democracy and equality: a socialist world.”

Socialism is defined as “a stage of society in Marxist theory transitional between capitalism and communism and distinguished by unequal distribution of goods and pay according to work done.”

“In a purely socialist system, all legal production and distribution decisions are made by the government, and individuals rely on the state for everything from food to healthcare,” Investopedia outlines. “The government determines the output and pricing levels of these goods and services.”

“Socialist ideals include production for use, rather than for profit; an equitable distribution of wealth and material resources among all people; no more competitive buying and selling in the market; and free access to goods and services,” it states. “Or, as an old socialist slogan describes it, ‘From each according to ability, to each according to need.’”