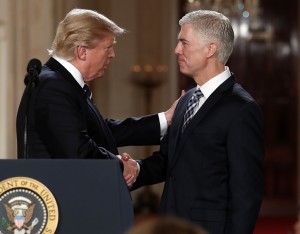 President Donald Trump speaks in the East Room of the White House in Washington, Tuesday, Jan. 31, 2017, to announce his nomination to the Supreme Court. (AP Photo/Carolyn Kaster)

The highest court in the land has nine justices again

Gorsuch will replace Justice Antonin Scalia, a conservative stalwart on the court who died abruptly in February 2016. Scalia’s vacancy brought out partisan attacks from both ends of the political spectrum, especially during the presidential election last fall. Republicans in the Senate stonewalled President Barack Obama’s replacement pick, appeals court Judge Merrick Garland, hoping a Republican president would fill the spot after the election. And it paid off. Republicans used a historic procedure change to break through a first-of-its-kind Democratic filibuster, paving Gorsuch’s way to a lifetime appointment to the Supreme Court.

Democrats pulled out all stops to block Gorsuch’s confirmation. They attacked Gorsuch’s record, tried to discredit him with plagiarism accusations, maligned the groups that supported him, and staged the first-ever partisan filibuster for a Supreme Court nominee.

But in the end, it only took Republicans 65 days from when President Donald Trump announced Gorsuch’s selection to confirm him to the bench. Sen. Johnny Isakson, R-Ga., was absent for the vote because of back surgery, and Sens. Joe Donnelly, D-Ind., Heidi Heitkamp, D-N.D., and Joe Manchin, D-W.V., voted with the GOP to confirm Gorsuch.

Gorsuch’s supporters claim he fits the same judicial mold as Scalia and will return the Supreme Court to a 4-4 ideological balance with Justice Anthony Kennedy as the swing vote.

“Throughout his career, Judge Gorsuch has demonstrated his commitment to judicial independence and to deciding cases according to the law instead of political preferences,” said Leonard Leo, White House adviser for the Supreme Court. “I applaud President Trump for choosing such an outstanding nominee and Leader McConnell and his colleagues for defeating an unprecedented partisan filibuster. A year ago we lost Justice Scalia, a giant, and today we are one step closer to seeing the preservation of his legacy on the Court.”

Gorsuch, 49, is the youngest Supreme Court justice since Justice Clarence Thomas won confirmation 25 years ago at age 43. His placement on the court is a key victory for the young Trump administration after failing to pass healthcare legislation last month.

Now that Republicans have invoked the so-called “nuclear option,” changing Senate precedent so a simple majority can confirm Supreme Court nominees, it could be easier to confirm more justices in the future should another vacancy open up. Three of the eight Supreme Court justices are 78 and older.

The context makes it that much more difficult for Democrats to accept Gorsuch’s confirmation.

“I hope Judge Gorsuch has listened to our debate here in the Senate, particularly about our concerns about the Supreme Court increasingly drifting towards becoming a more pro-corporate court that favors employers, corporations, and special interests over working Americans,” said Senate Minority Leader Chuck Schumer, D-N.Y. “So we are charging Judge Gorsuch to be the independent and fair-minded justice that America badly needs. If he is instead a justice for the Federalist Society and the Heritage Foundation, that will spell trouble for America.”

Now that he has cleared his last hurdle in the Senate, Gorsuch could be sworn in as soon as today to begin preparing for the high court’s upcoming cases.

The Supreme Court has a private conference April 13, in which the justices will review decide which new cases to hear. Some of the possibilities include expanding gun rights, state voting restrictions, and religious liberty for business owners.

Gorsuch’s first religious liberty case will be April 19. The court is set to hear oral arguments on Trinity Lutheran Church of Columbia, Inc. v. Comer, in which a church contends Missouri violated the Constitution’s religious freedom clause by denying it funds for a playground project because of its religious affiliation.