(NaturalNews) In yet another sickening example of the absolute mental derangement of modern society, Sesame Street has rolled out its first autistic muppet named “Julia,” says the Sesame Street website.

The rollout of autistic Julia is Sesame Street’s attempt to “normalize” vaccine injuries and depict those victimized by vaccines as happy, “amazing” children rather than admitting the truth that vaccines cause autism in some children and we should therefore make vaccines safer and less frequent to save those children from a lifetime of neurological damage. 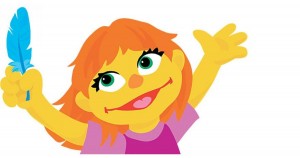 The fact that vaccines are linked to autism was openly admitted by top CDC scientist Dr. William Thompson, who admitted to taking part in a scientific fraud scheme involving numerous CDC officials. In the name of “vaccine science,” they actively altered data to eliminate the statistical link between vaccines and autism in African-American boys, thereby condemning millions of young black babies to a life of permanent neurological damage. #BlackLivesDONTmatter to the vaccine industry, it seems.

Another Sesame Street character, Elmo, has been exploited as a literal puppet by the vaccine industry to push a pro-vaccine message alongside the U.S. Surgeon General. It is instructive to realize that even though the vaccine industry claims its vaccines are based on scientifically validated safety claims, it must use social engineering tactics on children to attempt to portray vaccines as being recommended by their favorite muppet characters from Sesame Street. The tactic smacks of the same kind of exploitive propaganda programming used by sugary breakfast cereal makers to influence children with Saturday morning cartoon ads.

Former Merck virologists, by the way, have filed a False Claims Act with the federal government, saying they were ordered by Merck management to falsify vaccine research data in order to trick the FDA into approving MMR vaccines even though they didn’t work. These virologists even wrote that they believed such vaccines would cause the spread of contagious disease among those who were vaccinated. Not coincidentally, this is precisely what we are witnessing now with many mumps outbreaks. They tend to occur among children who are already vaccinated.

The CDC does not dispute the fact that vaccines are still made with mercury, MSG, aluminum, formaldehyde and other toxic additives.

Virtually no one in the scientific community disputes the fact that formaldehyde, mercury and MSG are known neurotoxins. There is no safety margin established in the scientific literature for injecting such items into the body of a child. It is merely assumed by the vaccine establishment that such toxins are present in quantities so small that they don’t matter to human biology.

Further, the adjudicated settlements report from the national Vaccine Injury Compensation Program reveals that flu shots containing mercury cause more vaccine injuries and financial payouts from the government than any other type of vaccine.

The federal government has desperately tried to delete these data from websites so that the public is denied access to this information, of course. As reported by investigative journalist Sharyl Attkisson:

In March, the federal government removed the latest vaccine injury court statistics—more than a year’s worth of data—from one of its publicly reported charts. It was an abrupt departure from the normal practice of updating the figures monthly.

Wiping the latest data means the “adjudication categories by alleged vaccine” chart on a government website no longer reflects the recent, sharp rise in court victories for plaintiffs who claimed their children were seriously injured or killed by one or more vaccines.

Since January of 2014, the number of flu vaccine cases conceded by the government is more than double the previous eight years combined. The adjudication chart only reflects half of the current number.

The flu business is big business, generating $1.6 billion revenues for vaccine makers. That’s a large motivation to cover up vaccine injuries and keep pushing vaccine obedience at any cost.

Rather than seeking to find and eliminate the root cause of skyrocketing rates of autism across America’s children, Sesame Street seems to believe that “normalizing” autism is the answer.

If this trend continues, we may soon have a Sesame Street “chemo boy” muppet who loves chemotherapy, and even an aborted fetus muppet that talks about how its tissues are being used to “advance scientific discoveries!”

After all, it’s never too early to start propagandizing children and demand their absolute obedience to a medical police state dominated by corporate interests.