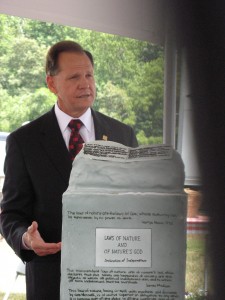 MONTGOMERY, Ala. – The following is submitted by Judge John Bentley:

From 2004 until 2007 Judge Moore worked to build the Foundation without “any” salary. The Washington Post article is completely silent about those years.

In 2007, the Foundation’s Board of Directors set a salary for Judge Moore in recognition of the “safe harbor” rules of the IRS. Three independent attorneys studied the salaries that other 501(c)(3) organizations paid their presidents. Those organizations, based on 2006 records, included Americans United for Separation of Church and State ($190,000), Planned Parenthood ($524,000), and the Southern Poverty Law Center ($320,000).

After a study of the compensation received by the presidents of other nonprofits, the Board recommended that Judge Moore’s salary be set at $180,000 per year, an amount consistent with the salary he had received as Chief Justice of the Alabama Supreme Court. In fact, Judge Moore received an average annual salary of $85,000 from 2007 to 2012, less than half of the approved amount. All income was reported properly to the IRS.

Because Judge Moore never received the full salary allotted, the Foundation Board in 2011 recognized the arrearage as a formal agreement and secured the indebtedness with a promissory note and second mortgage on the building owned by the Foundation. That document was filed as a public record in Montgomery and thus was not an “undisclosed deal” as stated in the Washington Post headline. The arrearage was also reported in the Foundation’s federal tax filing. To this date, that note and mortgage remain unpaid.

On January 1, 2013 Judge Moore assumed the Office of Chief Justice of the Alabama Supreme Court and never received any further compensation from the Foundation. Nevertheless, to further confuse the public and perpetuate its deceptive portrayal of the Foundation, the Washington Post cited critically an IRS audit of the 2013 tax year that had nothing to do with Judge Moore’s salary during the years 2007-2012. The newspaper failed to report the audit’s actual conclusion: “We accept your returns as filed” and “your organization continues to qualify for exemption from federal income tax.”

For the Washington Post to state that Judge Moore secretly “collected” monies he never received or that the Foundation failed to properly report its indebtedness to the IRS is false. Furthermore, the reporters responsible for the false and misleading articles on the Foundation and Judge Moore have written 20 stories, jointly, since last year, 17 of which have been direct attacks on our President and conservative principles. Their agenda-driven bias is reflected in the articles on Judge Moore. The Washington Post is trying to deceive the public as to wrongdoing that simply does not exist.