Shiite militias behind abduction of Americans in Baghdad 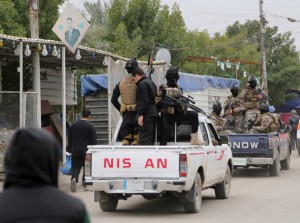 Members of Peace Brigades, a Shiite militia group loyal to Shiite cleric Muqtada al-Sadr, heading to Samarra, where Iraqi troops backed by Shiite fighters and are fighting extremists, stand with their weapons in their vehicles as they leave Baghdad, Iraq, Friday, Jan. 1, 2016. (AP Photo/Karim Kadim)

(WNS)–Iraqi security forces are conducting an intensive search for three Americans who went missing around Jan. 15, reportedly abducted from a seedy apartment building in south Baghdad. They were traced on Jan. 16 as far as Sadr city, a densely populated area of Iraq’s capital. No one has claimed responsibility for the kidnapping, and the motive remains unclear.

But U.S. and Iraqi official say the three missing Americans are being held by a Shiite militia group. “They were abducted because they are Americans, not for personal or financial reasons,” said one of the Iraqi sources in Baghdad.

The U.S. Embassy in Iraq confirmed the abduction but did not provide the reason for the captives’ role or presence in the country. “We are working in full cooperation with Iraqi authorities to locate the missing Americans,” embassy spokesman Scott Bolz said on Sunday.

The Americans were kidnapped from Dora, a south Baghdad neighborhood home to a mixed group of both Sunni and Shia Muslims, as well as some Christians. Some reports say the trio went to the home of their Iraqi interpreter for dinner, but residents and police say the Americans were captured from a well-known brothel.

“Gunmen in military uniforms came in five or six SUVs, they entered the building and then left almost immediately,” said Mohammad Jabar, who runs a shop down the street from the three-story apartment building where the Americans were snatched.

This isn’t the first time foreigners in Iraq have vanished at the hands of unidentified gunmen. Last month, a Qatari falcon-hunting party of 26 disappeared in Iraq’s southern desert. Iraq’s Interior Ministry said the abduction was “to achieve political and media goals,” without providing further details. The Qataris are still being held.

In September, 18 Turkish laborers were kidnapped from their construction site in Baghdad’s Sadr city by masked men in military uniform. The abductors released a hostage video, with the captives standing beneath banners that read, “Death Squad” and “Oh, Hussein,” a Shiite religious slogan. They were released later that month, and Iraqi Prime Minister Haider al-Abadi blamed the event on organized criminal groups.

“The kidnapping of the Americans citizens, and before them the Qatari hunters, whose fates are still unknown, undoubtedly indicate the growing activities of the organized gangs in Iraq,” Salim al-Jubouri, speaker of the Iraqi Parliament, said Monday.

But many believe the only groups in the country capable of executing the recent sophisticated, high-profile abductions are the state-sanctioned Shiite militias, who have played a key role in combatting Islamic State (ISIS) militants since the Iraqi military collapsed in 2014.

The Shiites are fighting against ISIS, but that doesn’t necessarily make them U.S. allies. Last month, when the Pentagon announced an increase in the number of U.S. special forces in Iraq, one Shiite militia spokesman vowed to attack them.

“Any such American force will become a primary target for our group. We fought them before and we are ready to resume fighting,” said Jafar Hussaini, spokesman for the Iraqi Hezbollah Brigades, one of the most powerful Shiite militias.