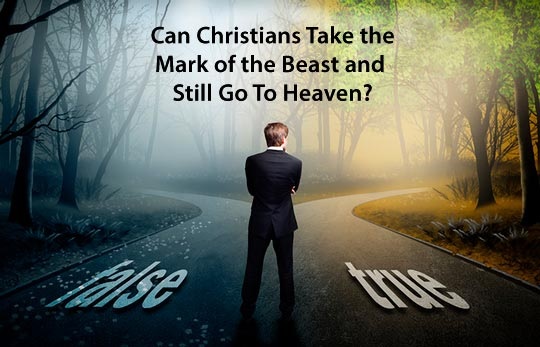 “Unforgivable sin” (which is also called eternal sin or blasphemy of the Holy Spirit) is most clearly detailed in Mark 3:22-30 and stated as believing and saying the Lord Jesus had an evil spirit and cast out demons by the prince of demons. Again, that type of blasphemy is stated as being unforgivable. Hence, unforgivable sin is not murder, homosexuality, witchcraft, selling drugs, theft, swindling, alcoholism, pornography addiction or any other sin for they can all be repented of, cleansed and forgiven. (See 1 Cor. 6:9-11; Lk. 23:42,43; 18:13,14; Acts 8:22,23; 19:18,19; 2 Chronicles 33; etc.)

The foregoing are the differences. The similarity between the Mark of the Beast and unforgivable sin is, in the end, both will drag the offenders to the same horrible lake of fire because they cannot be cleansed away via heart-felt repentance.

Sadly, false theology has even altered unforgivable sin to be the continual state of unbelief in the Lord Jesus, thereby errantly suggesting it only takes a moment of saving-regenerating faith to be eternally secure in salvation. That dogma known as eternal security (also called once saved always saved, the perseverance of the saints or the preservation of the saints) is unscriptural and DEADLY, though commonly taught. In fact, it is a false gospel (1 Cor. 15:2) and counterfeit grace – one which changes grace into a license to sin (Jude 4) and which all Christians are to contend against (Jude 3).

With the gene-altering, DNA-changing beast technology which can be connected to Artificial Intelligence, plus the soon-to-be-released microneedle patch vaccine, the mark of the beast is imminent! The scannable bodily MARK left behind at the patch vaccine site (the quantum dot tattoo) is going to be connected to banking! Hence, no mark, means no “buying or selling,” exactly as scripture states (Rev. 13:16,17). TIME IS VERY SHORT. PREPARE TO MEET THE HOLY HOLY HOLY GOD.

To get more information on this Great Tribulation period, come to the Evangelical Outreach weekly Internet Church at www.evangelicaloutreach.org/internet-church.htm. Remember Rev. 12:11.