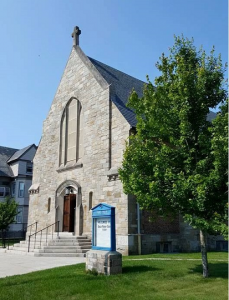 St. Paul’s Evangelical Lutheran Church at 445 Elmwood Avenue, Providence, RI will be celebrating its 150th Anniversary this year. Founded by German immigrants in 1867, just after the end of the Civil War, St. Paul’s has become a diverse community and the congregation now includes people from several African countries, especially Liberia, many of whom fled the civil war in that country.

The celebratory service of thanksgiving is being held at 10:00 AM on Sunday October 23rd. A reception will be held in the parish hall immediately following the service.  The Rev. Timothy Yeadon, President of the New England District of the Lutheran Church-Missouri Synod, will preach, and special music will include the boys’ choir of San Miguel School.

On Saturday October 15th, the congregation will host a banquet at the Pawtucket Country Club which will chronicle the past, present and future of the congregation. Tickets are $45.00 per person and can be obtained by calling Leela Ballah 401-359-2549 or by calling the church office at 401-941-5100.