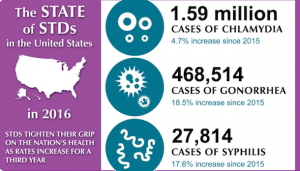 (WNS)–Rates of sexually transmitted diseases in the United States are at an all-time high, according to new Centers for Disease Control and Prevention (CDC) statistics. Americans reported more than 2 million cases of chlamydia, gonorrhea, and syphilis in 2016.

“STDs are a persistent enemy, growing in number, and outpacing our ability to respond,” said Jonathan Mermin, director of the CDC’s National Center for HIV/AIDS, Viral Hepatitis, STD, and TB Prevention. The report noted that cases of syphilis and gonorrhea are increasingly affecting a new population: men who have sex with men.

The majority of cases of syphilis are in that population, and half of the men diagnosed with syphilis are also living with HIV. The CDC also found the majority of new gonorrhea cases are in men, particularly those who have sex with other men, something the CDC said was alarming because of the growing threat of drug-resistant gonorrhea.

Also alarming is the fact that young people ages 15-24 account for the majority of reported STD cases, according to Mary Anne Mosack, executive director of Ascend, formerly the National Abstinence Education Association. Ascend advocates for “sexual risk avoidance” education in schools, encouraging teens to delay sex, not just use protection. According to Mosack, research has found that teens who have such education are no less likely to use a condom if they do become sexually active. Research also shows teens are having less sex.

But risks remain, according to Mosack: “This alarming report from the CDC, should motivate all who are concerned about youth to increase efforts to support programs that give youth the knowledge and skills to avoid, not merely reduce, their risk of this tragic epidemic.”